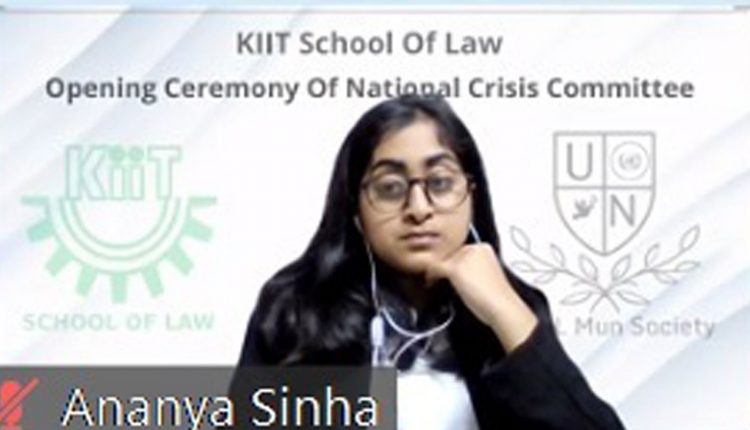 The KIIT Law School MUN Society organized a Guest Lecture by Lieutenant General Satinder Singh Saini, as part of the inauguration ceremony of the National Crisis Committee MUN Competition, on 20th March 2022. The event was organized under the leadership of Mr. Anirudha Choudhury, Assistant Professor-I, KIIT School of Law (KLS).

Tracing the historical relationship between Russia and Ukraine, Lieutenant General Saini stated that the present countries of Russia, Ukraine and Belarus all trace their cultural roots to Kievan Rus, a medieval principality in the Kievan Rus’ region. The Rurikids, a Varangian dynasty, had ruled the Rus principality from the 10th century. The principality fell victim to the Mongol invasion of Kievan Rus in the 13th century.

Kyiv was the capital of Russia from the 9th century until the Mongol invasion in 1240. The principality of Muscovy and, subsequently, the Russian Empire, made Moscow their capital. In a mostly bloodless incident in 1783, Imperial Russia seized Ukraine. The Cossacks of Ukraine, who had been semi-independent since the early seventeenth century, were ready to join the Russian Empire, and the Tsar welcomed them with open arms. The Ukrainians put up some resistance, but it was quickly put down. One of the first steps in the Russian Empire’s expansion into the Balkans and the Black Sea region was the acquisition of Ukraine.

He went on to state that the other countries were imposing tough sanctions on Russia which will have long term consequences. The issues will be political as well as economical as it directly and indirectly involves many countries in the world, therefore international implications will emerge. Global trade will be impacted to a huge extent because of the sanctions imposed on both sides. The western powers will insist on other nations to stop trading with Russia, for instance to stop import of energy and put sanctions on those nations who continue to trade with Russia.

The cold war like situation will emerge again with Russia and China on one side and the Western powers on the other. Mr. Saini quoted a famous line which stated that “Being an enemy of America can be dangerous but being a friend can be fatal”. He also threw light upon the amount of damage that was caused due to the war. There was infringement of sovereignty of a nation with huge amounts of human rights violations. Thousands of innocent people have been killed or have lost their family members, a huge number of children have been orphaned and rendered homeless. He emphasized on the futility of the war and the repercussions and the toll that they can take over the lives of the innocent citizens of a war-torn nation.

Lieutenant General Saini also discussed the past, present as well as future scenarios which would take place sooner or later in Ukraine and Russia. The lecture was interactive and enriching, providing a lot of insight about the present conflict to the participating members.