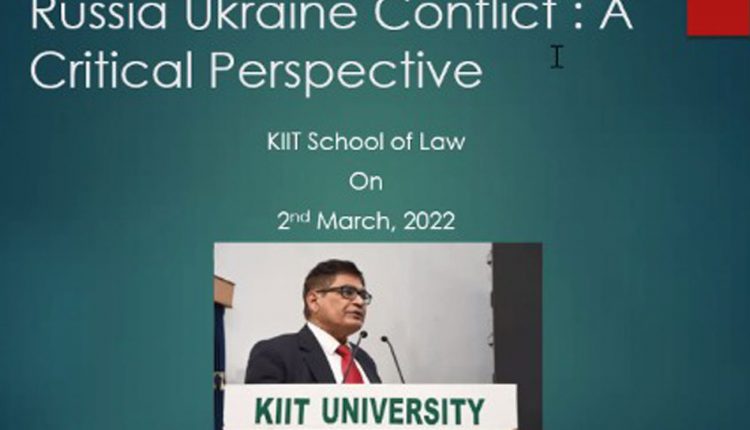 In his talk, Prof. Mishra described his visit to the erstwhile Soviet Union where he was a witness to the signing of a pact of offering arms and ammunitions between India and Russia. He elaborated on the history of Ukraine, stating that a large number of people there belong to Russian ethnicity and the country has been divided into East and West Ukraine. After the Second World War, the USA and USSR had a bitter relationship. The very asymmetrical power structure created international institutions like the United Nations, World Trade Organization, The World Bank and others.

He elaborated on the concept of cold war and the initiation and failure of the Berlin Wall and unification of Germany in 1989.  He moved on to the Russia-Ukraine Treaty of 1997 and then to the Ukrainian Revolution in the year 2014, which began with the civil unrest in Kyiv as a part of Ukraine’s ongoing Euromaidan protests against the government.  He discussed the Capture of Crimea in February and March 2014 and developments thereafter. Throwing light on the legal positions of the current conflict, he stated that Russia issued a statement saying that “they attacked Ukraine on solely humanitarian purposes”, while Ukraine argues that the attack is infringing their sovereignty as a nation.

The session not only provided the participants in-depth knowledge about the ongoing crisis, but also enlightened about the various intricacies of the powers and functions of the United Nations and other international bodies. Prof. Anirudha Choudhury, Assistant Professor, KIIT Law School also spoke on the occasion.