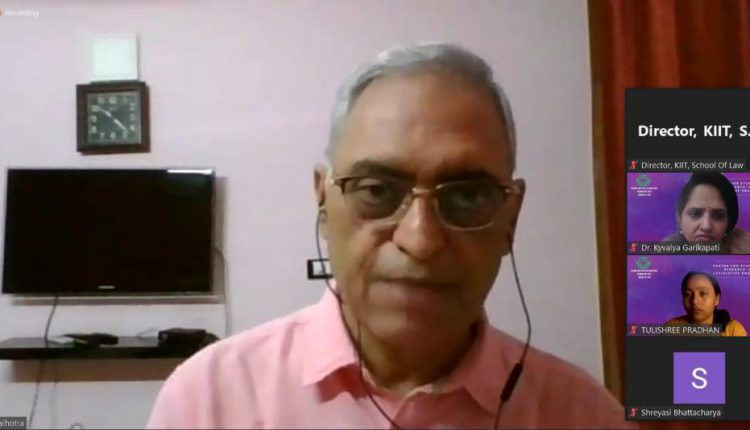 KLS Centre for Study & Research in Legislative Drafting (CSRLD) under the Department of Constitutional and Administrative Law conducted a National Webinar on “Revampment of the Epidemic Diseases Act, 1897 – Issues and Challenges” on 29th August 2021. The webinar was graced by Mr. P. K. Malhotra, Advocate, Legal Consultant and former Union Law Secretary for the Government of India and Mr. Anup Kumar Varshney, Joint Secretary and Legislative Counsel, Ministry of Law and Justice, Government of India. Welcoming the guests and participants, Prof. (Dr.) Bhavani Prasad Panda, Director, KLS provided valuable insights on the  significance of the Epidemic Diseases Act 1897 in handling public health emergencies.

Speaking at the first session, Mr. Malhotra stated that despite being one of the shortest legislation of India, Epidemic Diseases Act, 1897 has proved to be handy. He, however, observed that the Act has major limitations as it focuses on the Government’s powers during the epidemic and neither specifies its duties in controlling and preventing the same, nor enunciates any rights available to the citizens in the event of the outbreak. Referring to the case of Justice K. S. Puttaswamy V. Union of India, he further observed that the Act does not provide for procedural guarantee against any abuse of State power regarding privacy infringement. He concluded by remarking that the Epidemic Act required to be replaced with a more efficient and detailed legislation that would better deal with the pandemic situation.

Taking the second session of the webinar, Mr. Varshney highlighted the difficulties which were faced as India witnessed a sudden surge in the number of daily cases of Covid-19. He emphasized the importance of vaccination as an important countermeasure to Covid-19. Mr. Varshney concluded by saying that such adverse times were crucial lessons for all and it is important to take effective measures to prevent the third wave. The talks were followed by interactive question-answer sessions.