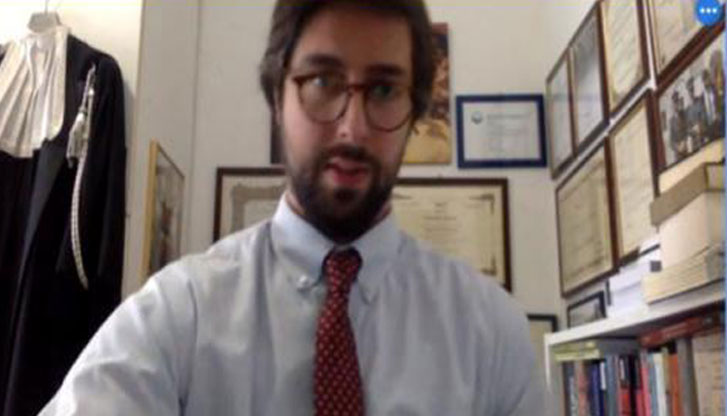 KIIT Law School (KLS) organized a Webinar on ICC Jurisprudence in the cases of Iraq and Philippines on 30th October 2021. Delivering the webinar talk, Mr. Giovanni Chiarini explained the crimes over which ICC exercises jurisdiction and those are genocide, crimes against humanity under war crimes and crimes of aggression. Mr. Chiarini is pursuing PhD from Insubria University and is Attorney at Law admitted as Assistant to Counsel (Conseils Adjoints) at the International Criminal Court, The Hague.

He shed light on the constituting elements of genocide. Subsequently distinctions between genocide and crimes against humanity and war crimes and crimes of aggression were also explained. He further elucidated about the ICC and its four organs mainly the Presidency, the Judicial Divisions, the Office of the Prosecutor and the Registry and explained the functioning of these organs. He had also elaborated on the principle of complementarity test which plays a key role in understanding ICC’s procedural approach with case laws and examples.

The session focused on how the office of the prosecutor works and how the external lawyer gets the materials and evidence to present in the court and what are the reasonableness of evidence and examination of the investigation.

Lastly, the lecturer talked about the situation in the Philippines and ICC’s roles in it based on the above-mentioned general premises. Several interesting questions were put up by the students and participants. While answering some of the questions the speaker opined that one of the basic challenges when it comes to exercising ICC’s jurisdiction is a very practical challenge of state co-operation (under article 57 of Rome Statute). He also addressed a question pertaining to liability of Corporation and how ICC has been following the same historical trend set by Nuremberg trial and various international criminal law tribunals by identifying the persons involved and thereby attaching individual criminal liability by lifting the corporate veil. Addressing the freshers, he gave some insights as to how to pursue careers in International Law and talked about internships in international law. He also enlightened the audience on the uneasy situation between ICC and African Countries and how the African nations are working differently from ICC.Ms. Mitul Dutta, Asst. Professor, KIIT Law School as the Faculty Coordinator attended the webinar. Ms. Anantoya Chatterjee and Ms. Samayeta Bal were the moderators for the webinar and Mr. Vedant Ratha and Mr. Shambo Dutta were the rapporteurs for the webinar.