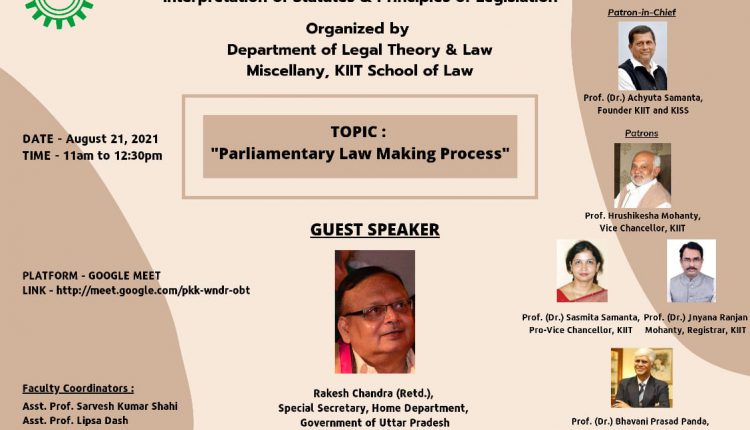 Delivering the talk, Mr. Chandra explained how the law making process is vital in a democratic polity. Democracy revolves around Parliament; and Parliament is the temple of democracy. He illustrated the British model of parliamentary system of governance and the functional approach. He talked about the importance of parliament. He explained the various methods of legislative process starting from the role of the law ministry (vetting), approval of the cabinet, and the committee of the ministry’s role. He stated about the scrutiny of bills before the standing committee of the parliament called “PRSEs”.  He also discussed the role of bureaucrats and other officials in examining and suggesting improvements in bills. Finally, he suggested law students know the importance, purpose of an act and its impact on the countrymen.

Rakesh Chandra is a former Civil Servant  and has served the state of Uttar Pradesh in different capacities. He is MA,, LLB, (Lucknow University), LLM (Babasaheb Bhimrao Ambedkar, Central University Lucknow). He has authored three books on Law; viz., “Globalization, Environmental Protection & Social Justice: A Study in Indian Legal Framework”, “Right to Privacy in India with Reference to Information Technology Era”, “Environmental degradation, water management and climate justice: A Study In Indian Legal Perspective”. He has authored more than forty papers on law, they are published in different National and International law journals. Currently, he is pursuing his Ph.D. in Law from Lucknow University.