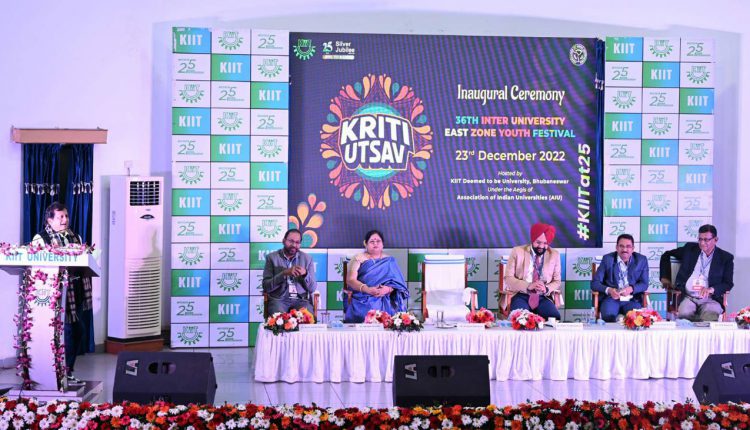 The spirit of India’s unity in diversity was reflected at the valedictory ceremony of the five-day-long Kriti Utsav, the 36th Inter University East Zone Youth Festival, as it came to an end today at KIIT-deemed-to-be-University, with participants narrating their experiences and life lessons learned, during the event.

The Kriti Utsav representing the Inter University East Zone Youth Festival saw the participation of 13 universities and 450 contestants and it coincided with the Silver Jubilee Celebrations of KIIT-Deemed-to-be-University “Soil to Silver’’.

Speaking on occasion Vice-Chancellor Prof Sasmita Samanta said “the spirit of Kriti Utsav under the aegis of the Association of Indian Universities (AIU) is based on the traditional Indian philosophy and the essence of our age-old tradition with education, sports, and heritage and culture being showcased and students showcasing the best of their talents.” She added that the “togetherness’’ of our traditional social system is also reflected during the youth festival at KIIT-DU.

AIU Observer and Professor from IIT BHU SK Sharma said “the university festival or Unifest as it is popularly called also teaches students to take failures in a stride and to do better and to try to win the next time. However, for the winners, he advised thorough practice on a daily basis so that the top performers from the East Zone can do their best at the national event to be held at Jain University in Bengaluru in February 2023.’’