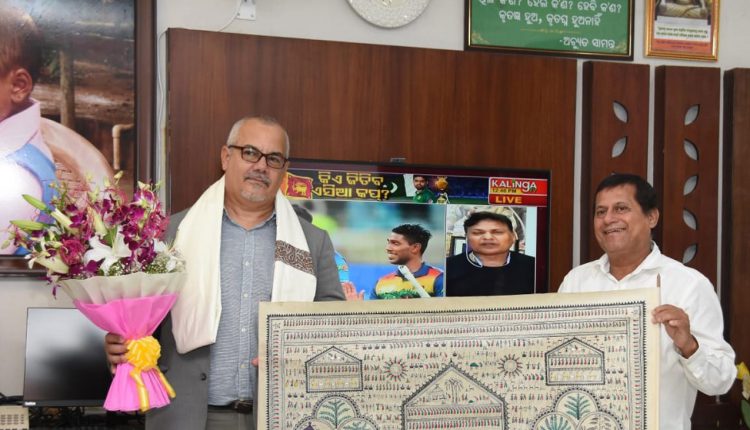 Ambassador of Cuba to India, H.E. Mr. Alejandro Simancas Marin visited the KIIT campus on 10th September 2022 and interacted with students of the KIIT Law School (KLS), where he stressed strengthening the bilateral and strategic ties across sectors with India.He said that Cuba has signed a new line of credit worth Euro 100 million for the procurement of rice from India. “Very soon, we in Cuba will be eating all types of Indian rice including the Basmati rice,” the Ambassador said.

The Cuban envoy, who also visited the Kalinga Institute of Social Sciences (KISS) campus during his visit, chronicled the lasting and decades-old engagements between the two nations across verticals including sports and culture. Emphasising increasing education ties, Mr. Marin disclosed Cuba’s desire to work closely with the KIIT Deemed to be University. He said, Cuba is offering scholarships to young doctors who have done their studies there and are practicing as doctors.

KIIT & KISS Founder, Dr. Achyuta Samanta, who interacted with the Ambassador separately, said in a tweet that they discussed the possibilities of synergies in the fields of cultural and academic exchange programmes.

Mr. Marin said that of the six ongoing economic corridors for development, three are being done with the support of India. “Cuba is also a member of the international solar alliance which is also a very important initiative taken by India and in the framework of that alliance, we are playing an important role in Cuba,” he said.

He also said, soon business delegations from India will visit the Cuban capital Havana comprising industry leaders and senior government officials. “We are also looking at enhancing cultural ties and will send a delegation comprising intellectuals and writers to Havana,” he said.

Director, KLS, Prof. (Dr.) Bhabani Prasad Panda and others were present at the event. The Ambassador interacted with students during a Q&A session and spoke about various facets of India-Cuba bilateral ties.