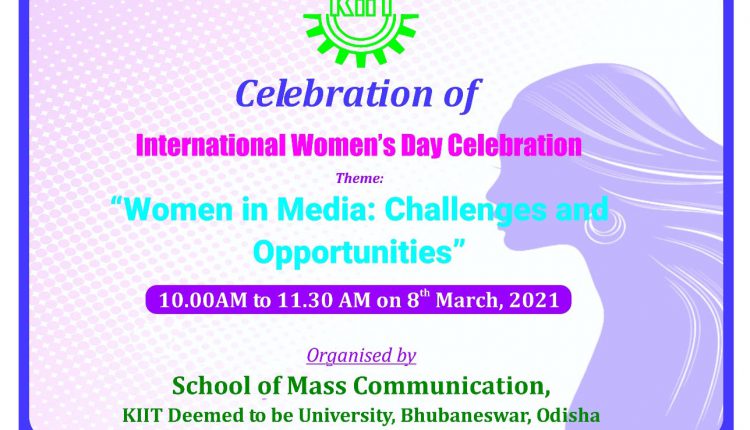 Webinar on ‘Women in Media’ by KSMC

On the occasion of International Women’s Day 2021, School of Mass Communication, KIIT Deemed to be University organized a webinar on “Women in Media: Challenges & Opportunities”. Two award winning senior women journalists, Ms. Subhra Priyadarshini, Editor in Chief, Nature India, New Delhi and Ms. Teresa Rehman, Managing Editor, The Thumb Print, Assam were the speakers of the webinar. It started with a welcome note by Prof Himansu Sekhar Khatua, CEO, KSMC, KSFMS, KSFT. Talking about the achievements of the University, Prof. Khatua emphasized on accomplishments by women and inclusive achievements of KIIT-DU, which has been increasing with the guidance and inspiration of Dr. Achyuta Samanta, Founder, KIIT & KISS.

Speaking at the webinar, Prof. Hrushikesh Mohanty, Vice Chancellor welcomed the eminent speakers and requested them to enlighten the students on various aspects. He invited the speakers to visit the campus after the pandemic. Prof. Sasmita Samanta, Pro Vice Chancellor, KIIT-DU said that International Women’s Day was not only a day of celebration but a spirit to continue forever. Dr. Jyana Ranjan Mohanty, Registrar of KIIT-DU talked about how women’s dedication in their profession leads to qualitative work with rich content.

In her talk, Ms. Priyadarshini stated that in her career she is lucky enough to have more opportunities than challenges but suggested the students to be ready for all sorts of challenges to come in future. She has received the BBC World Service Trust award for her coverage of the ‘Vanishing Islands of Sunderbans’ in the Bay of Bengal in 2006. She won acclaim in India for her coverage of the Orissa Super Cyclone in 1999 and the Indian Ocean Tsunami in 2004.

Ms. Teresa Rehman talked about her book ‘Bulletproof’ and the reason behind the nomenclature. She described the challenges faced by women in reporting in conflict zones like the toxicity, uncomfortable sexual humors and other hostile environment. Being a hard core conflict reporter, she has always tried to look at conflict reporting at general level. She was never provided a guide or a safety gear. Ms. Rehman, a recipient of the WASH Media Awards 2009-2010, also won the Ramnath Goenka Excellence in Journalism Award for two consecutive years. Her keen eye for the gender angle bagged her honors such as Laadli Media Award for Gender Sensitivity 2011, Sarojini Naidu Prize 2007 and award for Best Reporting on Panchayati Raj by the Hunger Project.

The talks were followed by an interactive question and answer session among the participants and the speakers. A social campaign video on gender equality made by 6th semester students of KSMC was screened on the occasion. The campaign video is about breaking gender stereotypes in our society.

Dr. Bidu Bhusan Dash, Course Coordinator, KSMC, in his vote of thanks, acknowledged the speakers as the gradient of the two different fields of journalism – Science and Conflict reporting. He announced the webinar is the first and new initiative programme under the title “Meet The Media Person”. The webinar was moderated by Ms Ruby Nanda, Assistant Professor, and School of Mass Communication.