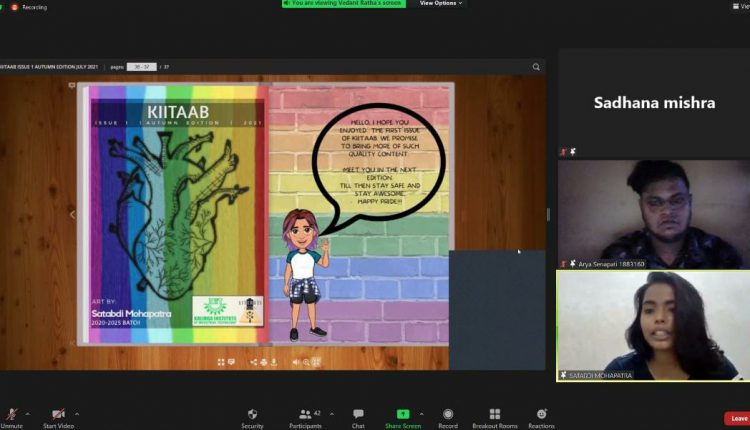 The Literary and Cultural Society of KIIT Law School (KLS), Literati, inaugurated its official e-Magazine ‘KIITAAB’ on 5th July 2021. The magazine, titled “Pride” celebrates Pride Month and is an ardent tribute to the LGBT Community. Prof. Achutya Samanta, Founder, KIIT & KISS, as the Patron-in-Chief, is the main motivation behind such an initiative by the students of Law.

Launching the magazine, Ms. Sadhana Mishra, the Chief Guest of the event, shared her journey and personal experiences of discrimination and abuse as a transgender, and how she never gave up. She spoke on gender equality and human rights, LGBT rights, the need for inclusion, the history of Pride Month and its celebration by students of the society.

“Rainbow always says we all are equal.”, she said regarding the significance of the seven colours in the Pride emblem. She also suggested starting queer groups on campus so as to provide the required support. Ms. Mishra, who is a founding member of Sakha, an organization working for the rights of the transgender community, marked the launch of KIITAAB as an innovative step.

Prof. (Dr.) Bhavani Prasad Mishra, Director, School of Law promised to extend a helping hand to improve inclusiveness of the LGBT community within the School of Law. “Let the rainbow be there with a smile on the face.”, he exclaimed, while congratulating everyone, including the faculty coordinators and students.

The Faculty Convenor, Mrs. Chinmayee Nanda, Assistant Professor, congratulated the whole team for successfully launching the magazine, which was her dream. “Four years ago, I helped plant a sapling, now I can see a nurtured plant.”, she stated, expressing her happiness for being an important part of the initiative.

The Editor-in-Chief of the magazine, Ishaan Michael spoke about normalising sexual orientation. He dreams of a day when people will be treated equally despite their gender and sexual orientation and accepted for who they are. The Deputy Editor, Sushree Dash tried to inspire people to own their sexual identity by sharing her own journey of being a bisexual. The magazine was a dream come true for her and she found its launch as the perfect opportunity to come out as a member of the LGBT community.

Shubhankar Verma, Head of Public Relations introduced a mascot for the e-Magazine KIITAAB, called “Lit”, which is a gender fluid mascot, and furthers the motto of the society, that is, “Everyone can be everything they want to be.” Pratyush Mishra, the Co-Convener of the Literati Society, elaborated the journey of Ms. Sadhana Mishra and discussed the interview conducted with her.

The faculty coordinators congratulated the team members of the Literati Society and Ms. Sadhana Mishra wished the team best wishes for the future. The event was concluded with the vote of thanks by Apurba Pattanayak, member of Literati.

Lecture on “Right to Privacy Under Indian Constitution in the Present Day: Issues and…