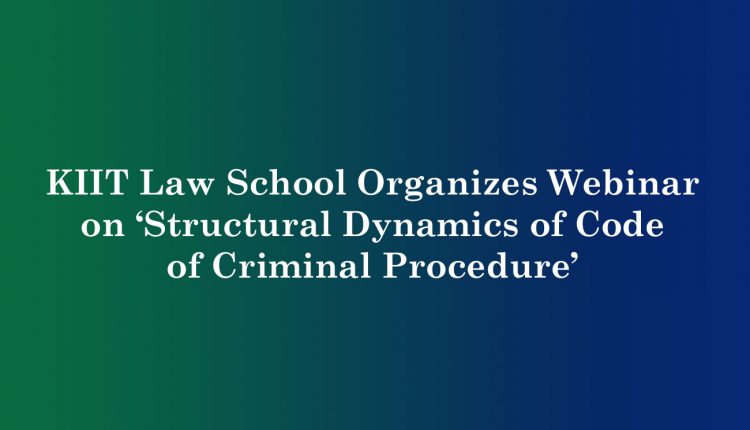 KIIT Law School (KLS) organized a webinar on ‘Structural Dynamics of Code of Criminal Procedure’ with Mr. Sujit Kumar Nandy as the guest speaker. The webinar aimed to sensitize the students of law about the fundamental and structural concept of the Code of Criminal Procedure. Mr. Nandy is a former member of the Judicial Service of the State. He served in different Civil and Criminal Courts, including as a District and Session Judge.

Mr. Nandy hooked the entire audience of Criminal Law enthusiasts with his extremely detailed presentation on the topic. He explained the main structure of the criminal justice procedure, which starts with the investigation finding evidence followed by an inquiry by the court on the collected evidence and finally the trial. He mentioned some of the very important provisions of the code that is S 174 that talks about inquest (which is done in the case of unnatural death). Further, he went on to discuss the stages of the trial. He also discussed the various circumstances on how a bail can be granted, focusing on provisions for an accused sentenced with the death penalty. The talk was followed by an interactive Q&A session.

The event was hosted by Mr. Abinash Ray and the vote of thanks was proposed by Ms. Swati Mohapatra.