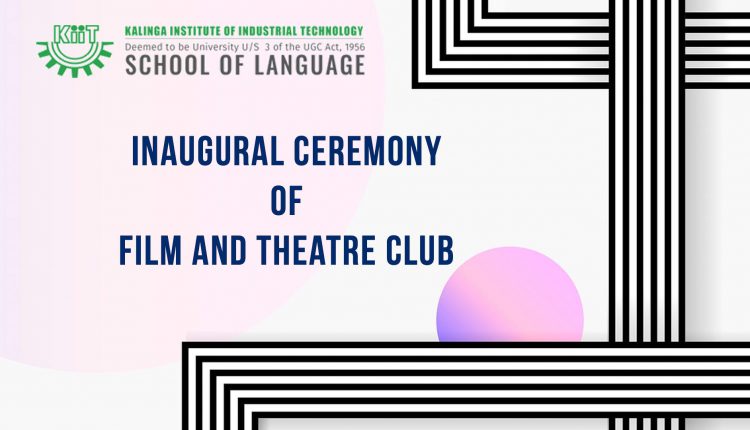 he Film and Theatre Club of School of Languages, KIIT Deemed to be University, Bhubaneswar, organized its first Inaugural Ceremony on a webinar titled ‘From Text to Visual Arts: Emergence of Film, Theatre and New Media’ on 12th December, 2020.

The webinar discussed film and theatre’s role and its importance in various aspects and fields, opening up new opportunities, touching topics on how English Literature, camera, stage and the newer platforms of artistic, academic and professional expressions have owned a common arena. It also narrated how we can indulge into the creativity of people’s minds and bring performative arts into our studies, and can acknowledge how literature has a major effect on the ‘New Media’.

Dr. Mukherjee explained how adaptation refers to both the product and process of textual exchange as well as involves transition from one genre to another like novels to films. Examples include Byomkesh Bakshi, Sherlock Holmes, Game of Thrones from the book A Song of Ice and Fire. These adaptations which change medium and novels are influenced from films, video games, TV series, etc. is called novelism.

Dr. Ghosh talked about how on the basis of personal opinion the author cannot influence the script since the script continues to evolve during the rehearsals, and becomes lucrative. He mentioned that in both visual form of art, film and theatre, women are portrayed as commodities, victims, mute spectators to the events that happen with them, or just a passive character supporting the male counterpart. As day goes on to roll, we see women evolving and proclaiming the space.

The final technical session was carried out by Dr. Hossain, who expressed how Social Media has democratized the whole field of journalism which earlier used to be a capital-intensive media. “The so-called Tik-Tok journalists are also doing outstanding work in verifying the whole set of fake news that is found over the internet. Ethical journalism has taken a back seat so what we need is a people centric media and information cross-checking agency be it the A. I. (Artificial Intelligence) or websites”, he stated.

The Panel Discussion was chaired by Dr. Sahel Md Delabul Hossain, Faculty Coordinator, Film and Theater Club, School of Languages. It was moderated by Ms. Divyashree Das, student of 1st year B. A. The entire program was organized and managed by Ms. Shatabdi Mishra, Ms. Subhangi Rout, Ms. Naazia Gular, the core management team, and the faculty members.