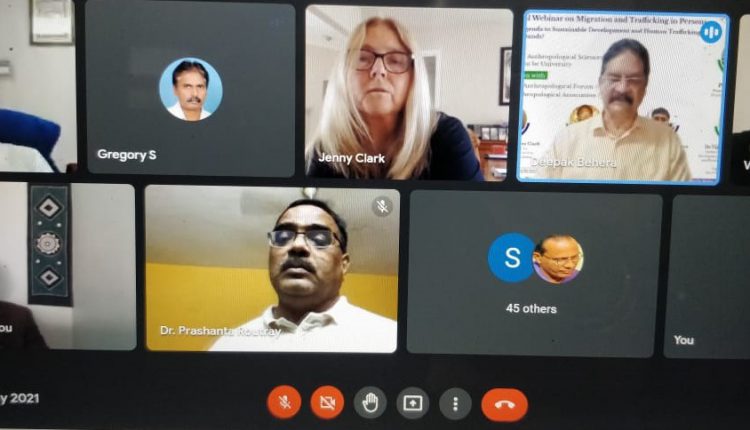 Migration and Trafficking in Persons

Moderating the webinar, Dr. Vijay Prakash Sharma, Former Director, Institute for Human Development, Eastern Regional Centre, Ranchi, and President, Jharkhand Anthropological Association spoke on “Human Trafficking – The Problem of Evolving Humanity”. Quoting the official definition of ‘human trafficking’ as mentioned in the Palermo Protocol in the year 2000, Dr. Sharma described various aspects of women and child trafficking concerning south-east Asia and India. Forced labor, slavery, flesh and organ trade, he said, were major reasons for human trafficking. “China, North Korea, Vietnam, Myanmar, Nepal, Bangladesh, and India have a large population in the lowest strata of poverty and lack of education, awareness, and ignorance, among them, makes them vulnerable to exploitation and victimization”, he said. Dr. Sharma cited an example from China, where gender imbalance in society encouraged women trafficking from border areas of Vietnam, North Korea, and Myanmar. In India, he said, Assam was strategically located for trafficking from the Myanmar and Bangladesh region. He specifically mentioned the exploitation of the tribal population of Jharkhand, who are abducted and forced into the porn industry, engaged as cheap labor, and forced into marriage. He suggested ways to mitigate the problems of trafficking and exploitation of the vulnerable population and concluded by saying “Police, judiciary, government, non-government organizations, Press and Ministry of Women and Child Welfare should call for joint action to curb the problem”.

Speaking on “The Impact of Covid-19 on Migration and Human Trafficking”, Professor Jennifer Bryson Clark, South Texas College, USA voiced concerns on the plight of the Mexican migrants to the USA, with special reference to the pandemic situation. She referred to the policy named “Title 42”, as a part of the public health code, under which the borders are sealed during the outbreak of communicable diseases. Mexican migrants are deported and the apathy of the Mexican government forces them to stay in camps, falling victim to atrocities and exploitation. The Trafficking Victim Protection Act in the US protects children and there are various lawsuits to at least allow minors into the country. She underlined the various reasons which led to an increase in migration into the USA with the change in Administration. The border patrol was overwhelmed by the surge triggering media attention, overcrowded shelters, and no social distancing. This spread Covid-19 and people were deported with any documentation as a result families were separated and started camping in parks and public places. Many non-profit organizations came to the rescue but still, there was an increase in kidnapping and extortion. The closing of borders led to irregular migration and Professor Clark concluded her speech discussing the Migration Protection Protocols.

Dr. Charles Hounmenou, Jane Addams College of Social Work, the University of Illinois at Chicago, USA spoke on the topic “Child Trafficking Prevalence in West Africa: the case of Benin ”. In his deliberation, he highlighted that child and woman trafficking involves aspects like forced labor as domestic servants, women being tempted with job offers abroad, and being sexually exploited in countries like Kuwait, Saudi Arabia, Lebanon, and Algeria. He mentioned the practice of ‘Vidomegon’ wherein wealthier families offer to provide education and a good life to children from poor families and then exploit them as household labor. Dr. Hounmenou also spoke about protection through identification of victims, patrolling borders, prevention through inspections, and prosecution through legislation of Acts relating to the transportation of minors.

Professor Arun Kumar Acharya, Sambalpur University threw light on the thrust area of the topic “2030 Agenda to Sustainable Development and Human Trafficking: Where India Stands?” He backed up his research with statistics showing that more male victims have been found in under 18 categories whereas more females have been trafficked in the category of above 18. He stressed six root causes of trafficking in India – poverty, lack of access to education and job opportunities, migration and displacement, discrimination based on gender, race, disability, and harmful traditional and cultural practices and dowry. According to him, the sectors of exploitation are domestic labor, marriage, child labor in the carpet industry, illegal adoption, and low sex ratio in states like Punjab and Haryana due to which girls from eastern states like Odisha, Bengal, Jharkhand, and Chhattisgarh are trafficked. Some of the key National Policies and Plans related to child labor and sexual exploitation were discussed in his presentation. He concluded by focusing on tackling the issue by protection, prevention, and prosecution.

Professor Deepak Kumar Behera, Vice-Chancellor, KISS-DU chaired and facilitated the entire proceedings of the webinar. Dr. Prashanta Kumar Routray, Registrar presented a brief profile of KISS-DU for the participants, and Professor Shalina Mehta, Former Professor, Punjab University spoke in detail about the upcoming World Anthropology Congress to be organized by KISS-DU in 2023.

Professor S. Gregory delivered the formal vote of thanks to the speakers, participants, technical and organizing team, and those who contributed to making the event a grand success.