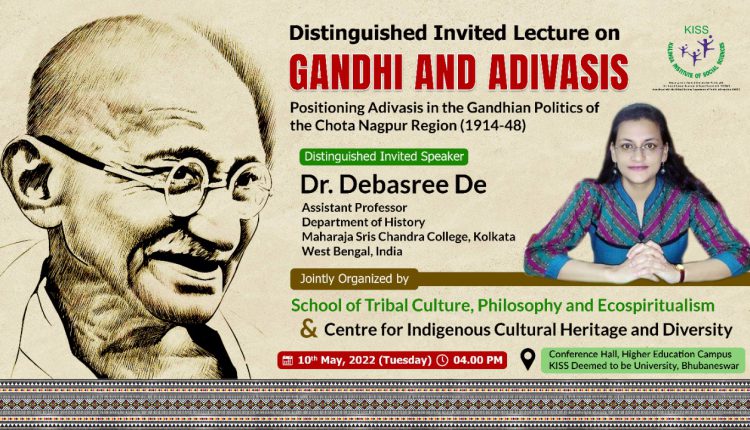 KISS-DU Organizes an Invited Lecture on Gandhi and the Adivasis

The School of Tribal Culture, Philosophy and Eco-spiritualism (TCPE) and the Centre for Indigenous Cultural Heritage and Diversity, KISS-DU, jointly organized an invited online lecture on Gandhi and Adivasis. The session was hosted in hybrid mode. Dr. Debasree De, Assistant Professor, Department of History, Maharaja Sris Chandra College, Kolkata, West Bengal was invited as the distinguished invited speaker. She has recently published a monograph on Gandhi and the tribal movements in eastern India between 1914 and 1948. She spoke about the contrarian relationship between Gandhi and the tribal political mobilization in the Chota Nagpur region during that period.

The programme began with a welcome address by the Vice-Chancellor of KISS DU Professor Deepak Kumar Behera. While commending the initiative, Professor Behera spoke briefly about the lingering disconnect between the Gandhian nationalist movement and the indigenous population in Eastern India and shared his observation in stating mainstream political mobilization often failed to consider the special interests of the indigenous communities.

Dr. Anirban Bandyopadhyay, Associate Professor of History and Director of the Centre for Indigenous Cultural Heritage and Diversity, introduced Dr. De. In his address, he emphasized the need for more research on the history of tribal political mobilization in eastern India, hoping that the research scholars of KISS-DU would pursue research activities on related topics.

In her presentation, Dr. Debasree De said that even though Adivasis often looked up to Gandhi as a saintly figure, he was interested in their political mobilization only to enlarge the scope of the mainstream national movement. Gandhi had sworn against violence, so he had some reservations about the violent indigenous uprisings against the colonial state. Two of his interlocutors, Verrier Elwin and Thakkar Bapa, engaged in long and passionate correspondence with Gandhi over various aspects of indigenous history and politics. Debates about the question of political violence and temperance would form the centre-piece of this correspondence. Dr. De concluded by persuasively drawing up an essential contradiction between the Gandhian model of politics and the language of indigenous politics in eastern India. Even though they came in contact on several occasions and made genuine efforts to understand one another, they couldn’t build a joint front.

Faculty members and other attendees including Professor Emeritus participated in a lively discussion after the presentation. Professor Nirmal Ch. Dash, a senior anthropologist and Professor Emeritus, KISS-DU, spoke about the limitations of mainstream nationalism. The session was attended by Postgraduate and research students from History and Political Science departments.