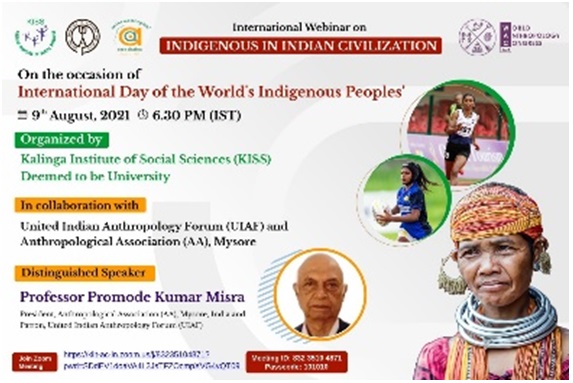 KISS-DU organized day-long events to observe International Day of World’s Indigenous Peoples on 9th August 2021. The First Meeting of the Tribal Advisory Council (TAC) was organized in the first session. A meeting on the theme – ‘Leaving no one behind’ – decided by the United Nations was held in the second session. An international webinar on the topic ‘Indigenous in Indian Civilization’ was also conducted.

Tribal Advisory Council (TAC) has been formed at Kalinga Institute of Social Sciences (KISS) Deemed to be University to advise on the matters pertaining to the welfare and overall development of the institution. Noted academicians and social activists hailing from the tribal community have been nominated as the members of this Council. The TAC had its first meeting in blended mode on 9th August, 2021. The Council will infuse new ideas and thoughts in the sphere of education to the students of KISS-DU by proposing, suggesting and validating the works done on campus. This will ensure that the philosophy of Prof. Achyuta Samanta, Founder, KISS & KIIT to “Educate, Enable and Empower” is followed in both letter and spirit in the organization.

In his welcome address, Shri R. N. Dash, IAS (Retd.), Secretary, KISS said: “I am elated to learn that KISS-DU has initiated such a novel idea which has not been adopted by many universities in the state and it is definitely a welcome step in the field of education and tribal development.”

Professor Deepak Kumar Behera, Vice-Chancellor, KISS-DU, in his inaugural address, said: “It is an honor to attend the first meeting of the Tribal Advisory Council on 9th August which also happens to be International Day of the World’s Indigenous Peoples’. The growth and development of KISS-DU will be ensured through TAC which will be systematically and strategically undertaken by preparing a realistic and achievable roadmap”.

Dr. Prashanta Kumar Routray, Registrar, KISS-DU introduced the members of the Tribal Advisory Council and highlighted their niche areas of work in education, women empowerment and girl child education. “The Tribal Advisory Council has to validate formal education and has to merge with traditional knowledge systems and suggest beyond regular courses. KISS is celebrating International Day of the World’s Indigenous Peoples today and we are glad to have the members of the TAC with us”, he remarked.

Dr. Kanhu Charan Mahali, IPS (Retd.), Director General, KISS-DU and Chairperson of the Tribal Advisory Council steered the session and spoke about the aims and objectives behind establishing this Council, roles and responsibilities entrusted upon the members and said: “The TAC will contribute to the development of tribal children. Students attain formal education but besides that gaining practical knowledge from traditional practitioners is equally important. It will help in promoting, preserving and protecting tribal identity for the coming generations.”

Among others, Members of the Tribal Advisory Council (TAC), KISS-DU advised on various significant aspects which will explore new possibilities in improving the education system and other things related to tribal development. The suggestions revolved around churning strategies to pave way for promoting, preserving, projecting and protecting tribal culture, heritage, language, food, identity, traditional knowledge system, appreciation for introducing the concept of Professor of Practice, learning tribal philosophy, dance, art, music and unanimously welcoming the idea of instituting two new research chairs in the name of Birsa Munda and Laxman Naik.

Mr. Kadey Soren, Deputy Director, KISS and the Convenor of the Tribal Advisory Council facilitated the proceedings of the first meeting of the TAC and proposed the vote of thanks.

UN Theme: ‘Leaving no one behind’

The second lap of the celebration was based on the theme decided by the United Nations ‘Leaving no one behind: Indigenous peoples and the call for a new social contract’. KISS shared the celebration with Indigenous delegation from Jharkhand at KISS campus and KISS-DU campus on the occasion. The delegation appreciated the Adivasi model of education imparted at Kalinga Institute of Social Sciences initiated by Prof. Achyuta Samanta and decided to replicate the KISS model in the state of Jharkhand. The delegation met the Hon’ble Governor of Odisha and submitted the memorandum on behalf of the Adivasi people. The delegation was led by Anjali Soren Marndi, who is daughter of Shri Sibu Soren, Fmr CM of Jharkhand and Adivasi leader and Prahlad Purty, Fmr. MLA.

He said: “I am using the term Scheduled Tribe as it is constitutionally valid. However, the terms tribe, indigenous and primitive can be used interchangeably. During the colonial period, a lot of ethnographies on tribes were produced which cannot be separated from the colonial interests and concerns. Some of the routine justifications are:  promoting the cause of the growing field of anthropology and recording variations and the rapidly vanishing cultures.  I strongly believe that the anthropological literature produced during the colonial period needs to be reread by native scholars with subaltern consciousness. I would now like to throw light on Isolationalist and interdependent models. The popular perspective is that the tribes have been isolated people. The detailed studies of the scholars have suggested that the food collectors and the food producers have been interdependent and resource managers”.

Professor Deepak Kumar Behera, Vice-Chancellor, KISS-DU introduced the theme of the international webinar. He facilitated the entire proceedings of the webinar and said: “Today’s date will be remembered in golden letters in history as today we had the first meeting of the newly constituted Tribal Advisory Council (TAC), the brainchild of Professor Achyuta Samanta, Founder, KIIT & KISS.”

Dr. Prashanta Kumar Routray, Registrar, KISS-DU presented a brief profile of the university and shared the key aspects of the first meeting of the Tribal Advisory Council. He said: “I would like to share with eminent anthropologists that the TAC has recommended implementation of the concept of Professor of Practice, preparation of an exclusive Tribal Calendar of Festivals, promoting games, and sports, floating diploma and certificate courses on Tribal Life Skill Education, opening School of Performing Art, a course on Food Science, establishing two new Research Chairs on Birsa Munda and Laxman Naik”.

Professor S. Gregory, Member Secretary, UIAF delivered the formal vote of thanks to all present.