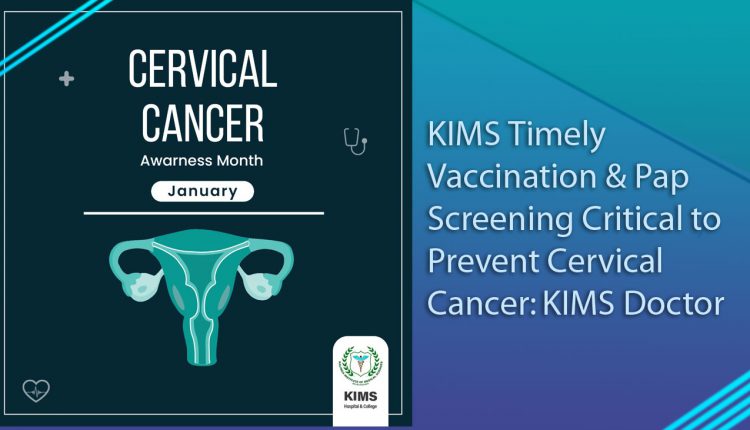 Cervical cancer is believed to be one of the most common cancers seen in women in India and the second most prevalent cancer in the country. But it is largely preventable if awareness is created from an early age.

“Vaccine should be taken before sexual debut. However, as early as 9-10 years has been recommended as at that age the immune response is excellent,” he said, adding that a broader consensus is also developing among policymakers for early immunisation.

His observation comes against the backdrop of the month of January being dedicated to raising awareness about Cervical Cancer and HPV vaccination. The World Health Organisation (WHO) is focussing on ending cervical cancer within a few generations and has picked this as the theme for this month.

Cervical cancer is linked to a form of virus called human papilloma virus (HPV) that is transmitted through sexual contact. The infections can regress spontaneously, but persistence could be a cause of concern.

According to a government estimate, every year in India approximately 1.25 lakh women are diagnosed with cervical cancer, and over 75 thousand die from the disease. KIMS receives about 10 to 12 cases every year.

The symptoms associated with the disease could be irregular bleeding, post-coital ( after sexual intercourse) bleeding and foul-smelling discharge. But the remedy lies in our hands if the level of awareness remains high, Dr Rath, considered an expert in his field, said.“Not all cells, however, become cancerous. Some will reverse as well. We need to address them there itself”, he said. He stressed undergoing tests at the interval of three to five years. The standard form of diagnosing the precancerous lesion is through the ‘Pap smear’ test. The HPV test is also done in selected centres.

What can come as a big relief for vaccine seekers is the indigenous production of the vaccine in India, bringing down the cost of the dose. In September last year, the Central Government announced India’s first indigenously developed vaccine, ‘CERVAVAC’ for the prevention of cervical cancer. It has been developed by the Pune-based Serum Institute of India (SII) in collaboration with the Department of Biotechnology (DBT), the Science and Technology Ministry.

The availability of this vaccine could drastically reduce the dependence on imported vaccines, whose cost remains unaffordable for some.

Department of Radio Diagnosis, KIMS Organizes CME and Workshop on “Endo-vascular and…