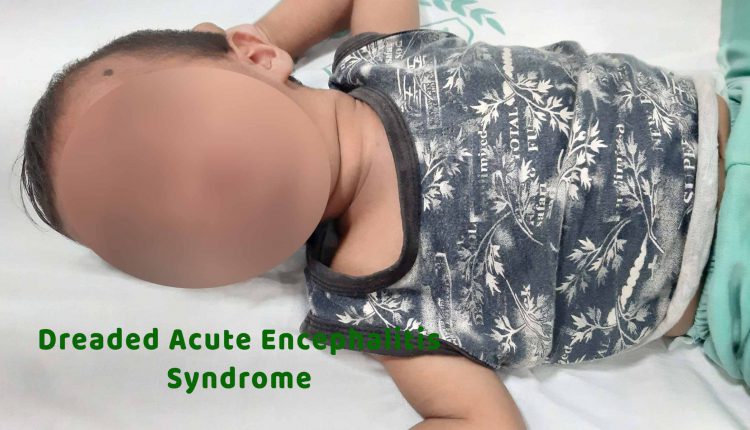 KIMS had a case of a 1 & 1/2 years old male child with high grade fever for 7 days, abnormal body movements and altered sensorium for 2-day. The child had multiple episodes of generalized tonic-clonic seizure in the last one day before admission. The child was received at PICU in a very poor condition. The PICU team led by Dr. Sibabrata Patnaik managed this acute state very methodically and with empathy due to financial constraints of parents. It’s a great challenge to diagnose initially, but after MRI and CSF analysis, it was regarded as AES. KIMS doctors were unable to exclude Autoimmune encephalitis as parents refused to do the test of the autoimmune panel. However, empirical treatment with the antiviral and doxycycline was instituted initially. MRI of the brain showed T2/Flair hyperintensities with diffuse restriction of DWI in bilateral basal ganglia and cerebral peduncles.

The child improved over 7 days and was shifted to the Paediatric ward for further management. With help of a neurologist and physiotherapist, the child was treated for another 3 weeks at the ward. Though the child needs multiple anticonvulsants and centrally acting muscle relaxant, sensorium and general wellbeing is getting improved day by day.

Parents were very happy that their baby got treated properly in KIMS. They showered their blessing to staff and doctors taking care of their child. The Paediatric team expressed thankfulness to the management for providing infrastructure and diagnostic facilities to carry-out their work.