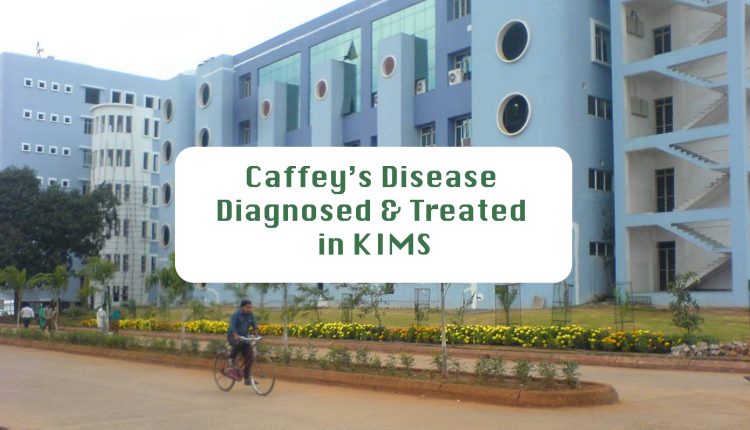 Caffey disease, or Infantile Cortical Hyperostosis (ICH), was first reported in 1945 by Caffey and Silverman. The disease is a rare and poorly understood disorder, characterized by painful soft tissue swelling and cortical thickening of the underlying bones. Its principal features also include the onset time, usually in the early part of the 1st year of life, more than one site of soft tissue swelling, and multiple scattered hyperostosis. The radiological differential diagnosis should include Osteomyelitis, Vitamin A Intoxication, Scurvy, Syphilis, Osteosarcoma and battered Child Syndrome. The emphasis here is to remind clinicians about the existence of the disease in this country. While there are no laboratory tests to confirm the diagnosis of Caffey disease, a high index of suspicion in a typical clinical setting can avoid protracted investigations for this otherwise self-limiting illness.

The patient, a three-and-half month old baby girl, had radius and ulna of both upper limb and the right femur, tibia and fibula of lower limb were involved. The soft tissue swelling was accompanied with cellulites. An investigation of Doppler USG and X-ray of limbs revealed the diagnosis. The treatment is generally symptomatic and most patients recover without any deformity. Vitamin C was given to the baby as recommended.

The classic form has an onset within the first six months of life. The manifestations include irritability, swelling of the overlying soft tissue that precedes the cortical thickening of the underlying bones, fever and anorexia. The swelling is painful with a wood like indurations but with no redness or warmth, thus suppuration is absent. Mandible is the most commonly involved site followed by scapula, clavicle, ribs and long bones. There are usually no other signs and symptoms. The pain can be severe and can also result in pseudo paralysis. Other rare clinical findings include dysphagia, nasal obstruction and proptosis. The study patient had none of these uncommon features. Laboratory findings include elevated ESR, and in some patients high alkaline phosphatase, thrombocytosis, anaemia and raised immunoglobulin levels.  The severe prenatal onset form is characterized by extensive hyperostotic bone involvement, angulations and shortness of long bones, as well as polyhydramnios and fetal hydrops, which may lead to the incorrect diagnosis of lethal form of Osteogenesis imperfecta. But absence of other signs like a blue sclera, delicate skin and total absence of fractures and typical histo-pathological features differentiate this condition from Osteogenesis imperfecta.

Radiography is the most valuable diagnostic study in ICH. Cortical new bone formation (Cortical Hyperostosis) beneath the regions of soft tissue swelling is the characteristic feature. While no laboratory tests are specific for diagnosis of ICH, the important differential diagnosis that are to be excluded are osteomyelitis, chronic hypervitaminosis A, bone tumour, scurvy, child abuse and prolonged PGE1 infusion. Awareness of the existence of this rare condition and its typical clinic- radiological profile will avoid the patient being subjected to unnecessary investigation.

Caffey disease is mostly self-limiting and resolves within six months to one year and may not need any treatment. However, Indomethacin or Naproxen could be used in really symptomatic cases. Steroids can be administered if there is poor response to Indomethacin. In this case, Ibuprofen was used and the outcome appeared to be satisfactory. In some cases, the bone lesions can recur suddenly at their original sites or at newer sites and can have an unpredictable clinical course with remissions and relapses. Hence, relapse can happen several years later.

The aim of this short report is to highlight this disease entity to avoid unnecessary and invasive investigations. The diagnosis of this disease needs an awareness of this condition along with a high index of suspicion. A good history, clinical examination, basic laboratory studies, and plain radiographs are sufficient enough to confirm a diagnosis of this entity in most cases.