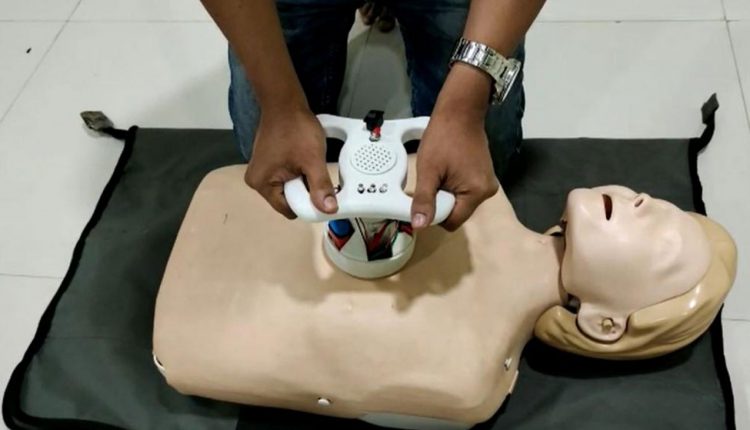 Doctors at Kalinga Institute of Medical Sciences (KIMS) have developed a cost-effective technology that can provide prompt assistance and save a person at home suffering from cardiac arrest. The ‘Sanjivani’ hand-held gadget, as the name suggests, is a critical life-saving device. Its development assumes significance as various reports and studies have reflected a significant increase in heart attack-related deaths in recent years.

Today, approximately 85 percent of sudden cardiac arrests are being reported at home or outside the hospital, with the survival rate being less than 10 percent. The human brain suffers irreversible damage after 6 minutes of cardiac arrest in the absence of high-quality chest compressions, which means pressing the middle part of the chest at a rate of 100 per minute, and a depth of at least 5 centimeters while allowing complete chest recoil between two successive compressions.

The key to saving a person who has suffered a cardiac arrest is by applying the Cardio-Pulmonary resuscitation (CPR) procedure. If initiated early on, it can triple the survival rate. Poor emergency medical service, traffic congestion and the large population in India, though, pose a challenge. It’s the family members, friends or bystanders who have to initiate the call for help and provide high-quality chest compression till the arrival of emergency medical help. This is where the Sanjivani device comes as a game-changer and extremely advantageous, said Dr Ashok Kumar Badamali, Associate Professor of Cardiac Anaesthesia at KIMS.

Sanjivani is India’s first manual Cardio-Pulmonary resuscitation (CPR) Assisted device and provides audio-visual instructions in regional languages about the rate, depth, and adequacy of chest recoil. The device comes in quick aid to revive the patient by the immediate respondent without wasting precious time while waiting for ambulances.

The beneficiaries will be victims of cardiac arrest of any originn like heart attack, electrocution, lightning injury, drowning, collapse due to choking/food allergy, suffocation due to fire mishap, etc, Dr Badamali said. “Human hand has more than 20 small bones in the palm area making chest compression a difficult job for the rescuer due to the 90-degree position of palm and forearm in manual chest compressions. A first responder can perform high-quality CPR till the arrival of the emergency medical team for a victim of cardiac arrest with the hand-held gadget Sanjivani, where the palm and forearm bones are in a longitudinal position,” he explained. The innovation of the device, he said, has come in response to the suggestions received from some women during a training program in 2019 at the KIMS Hospital lobby.

“You are here to guide us about the rate, depth and recoil adequacy of chest compression. Who will guide us at the time of actual exigency at our home? Can there be something, some device which will guide us like you? This unmet need of community, suggested by the ladies, was perceived and led to the invention of the device,” Dr Badamali underlined.

The working prototype was made with the assistance of the NIDHI PRAYAS Grant, a program by the Department of Science & Technology (DST) that supports aspiring innovators through KIIT-TBI. The simulation testing was carried out at KIMS, a constituent of KIIT Deemed-to-be-University, Bhubaneswar.

Now the department of Biotechnology has sanctioned its highest flagship Grant known as the “Biotechnology Ignition Grant” of 50 Lakh to Dr Badamali for developing the Sanjivani Ecosystem to connect event sites with hospitals, and ambulance seamlessly. This product will automate the hospital Code blue response too without creating chaos. A team of experts from various IIT, IIM, and established business consultants approved the project after multiple scrutinies.

The innovation has been appreciated by Odisha Chief Minister Naveen Patnaik during the inauguration of the start-up building O-Hub in Bhubaneswar. The gadget was also appreciated by the head of medical innovation, WHO, Geneva Mrs Louise Agarsnap on World Health Day on April 7 during the inauguration of the first global WHO Medical Innovation Collaboration Centre at Visakhapatnam.

Dr Badamali was also felicitated early this month as one of the 12 finalists from among 6,700 participants of the TATA-IIM Kolkata Social Innovation Challenge 2021-22 at IIM Kolkata.