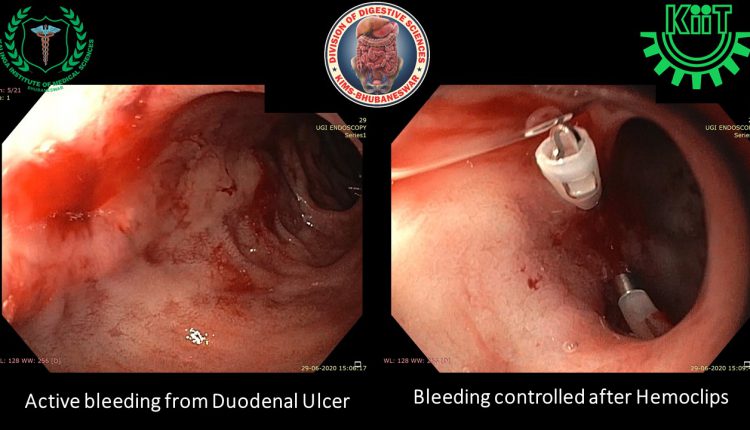 A Life-Threatening Case of Upper GI Bleeding Managed in KIMS

A 74-year old gentleman presented in the Emergency Department of Kalinga Institute of Medical Sciences (KIMS) with complaints of blood vomiting and passage of black tarry stool. He also had postural dizziness and tachycardia which indicated that the patient had lost around 15-30% of blood due to upper gastrointestinal bleeding. He was immediately admitted, resuscitated with IV fluids and blood transfusion. Urgent Upper GI endoscopy revealed a bleeding duodenal ulcer (with active oozing), which was straightaway controlled by application for hemoclips. Patient recovered with standard treatment along with endoscopic therapy and was discharged in stable condition.

Upper GI bleeding is a medical emergency with a mortality rate of nearly 5% (non-variceal), which can even be higher in elderly patients. The Division of Digestive Sciences, KIMS as a quaternary referral institute is capable of providing all sorts of modern state-of-the- art treatments for any kind of GI bleeding including latest Endoscopic Therapies, Radiological Angio-embolization, TIPS, Gastro-Intestinal Surgery by a team of Therapeutic Gastroenterologists, Interventional Radiologists and GI Surgeons with expertise and experience.