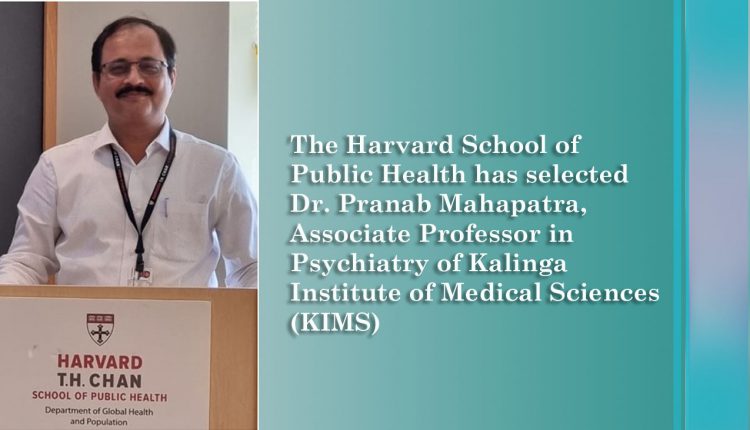 The program selects and trains health professionals with full-time positions in a developing country and a distinct track record of research, teaching, or policy work in chronic disease prevention.

Dr. Mahapatra was the first clinician and the second person from Odisha to be selected for the program. He works on community-based research — how people manage their illnesses and their challenges while seeking care.

The program supports research to improve cardiovascular health and psychosocial stress and primary care in developing countries. The selection process was in multiple screening stages. A final interview was conducted online by Prof. Goodarz Danaei, Director of the Program. Six applicants were chosen from across the world for 2022.

He joined the program in July.  After admission, Dr Mohapatra and other Lown Scholars were invited to the Harvard T.H. Chan School of Public Health in Boston for four weeks of training and workshops. Eminent Harvard faculties trained them. Notable among them were Adolfo Rubinstein, a Harvard alumnus and the former Minister of Health, Argentina.

They were then appointed as visiting scholars with long-term association with the Lown Program. The topic of Dr Mahapatra’s proposal is titled “Understanding the dual challenges of cardiovascular-psychiatric multimorbidity among urban poor.” This will explore the challenges of the urban poor when they face the double burden of cardiovascular diseases and mental illnesses.

His work searches for ways in which health services can be made suitable to meet the needs of low and middle-income countries. He will be mentored by Dr Margaret E. Kruk, Professor of Health Systems at the Harvard T.H. Chan School of Public Health. Dr Mohapatra’s local mentor is Dr Sanghamitra Pati, Director, ICMR-RMRC Bhubaneswar (A Harvard-Lown Scholar herself).