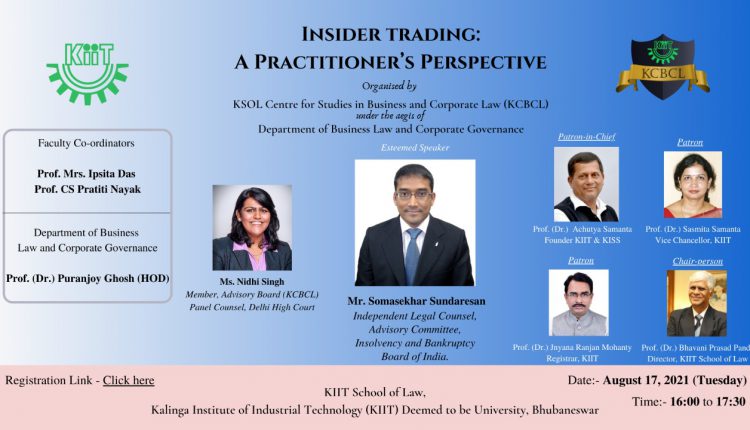 The KIIT School of Law Centre for Studies in Business and Corporate Law (KCBCL), under the aegis of Department of Business Law and Corporate Governance conducted a webinar on “Insider Trading: A Practitioner’s Perspective” via Zoom Platform on 17th August 2021. It was graced by Mr. Somasekhar Sundaresan, Independent Legal Counsel, Advisory Committee, Insolvency and Bankruptcy Board of India.

Prof. CS Pratiti Nayak introduced the session, and then called upon Prof. (Dr.) Bhavani Prasad Panda, Director, School of Law, KIIT Deemed to be University, Chairperson of KCBCL to give the welcome address. He gave a warm welcome to the esteemed speaker, Mr. Somasekhar Sundaresan, all the faculties, students and the foundational pillars of the KIIT Deemed to be University. He stressed on the market economy of India, which has opened avenues for insider trading in our country.

The session commenced with Riddhi Kumari introducing the esteemed speaker Mr. Somasekhar Sundaresan. The speaker then started his discussion with various principles of insider trading which has been etched out in the statute. To explain the underlying principle of insider trading he stated that; “An insider benefits from the asymmetrical information which is accessible”. The element of seeking profits/gains from such asymmetrical information is what makes insider trading to be a malpractice following torts and common law.

Mr. Somasekhar Sundaresan then elaborated on the various ingredients of insider trading. For the same he referred to the SEBI (Prohibition of Insider Trading) Regulations 2015 and the Sodhi Committee Report. The inherent ingredient of insider trading is- who is an insider and for that we need to understand the concept of a connected person. To determine the element of a connected person, a time period of 6 months is taken into consideration from the time when the act was committed. Although in India, the aspect of connected person would include two more features, those are: frequency of communication with the insider & somebody who is deemed to be connected i.e. either through relationships or the reason for that connection.

Thereafter, he touched upon the concept of “Unpublished Price Sensitive Information”(UPSI). It depends on whether it would have a material impact in the price, and the likelihood of causing an adverse effect as a result. Thereafter coming to the actual definition of insider trading, he stated that it is the connected person and any other person who received information from the connected person. This would make recipients of the information passed on by insiders also to be an insider. He briefly mentioned the aspect of deemed connection in this regard. To understand this better, he urged the audience to read Regulation 3 & 4 of the SEBI (Prohibition of Insider Trading) Regulations 2015, whereby he also mentioned the need to know principle. This meant, as he said, that the need should arise from the furtherance of the work which needed to be done. The speaker then went into a greater detail regarding whether or not a person is a connected person would always and necessarily be a mixed question of fact and law to be answered from the facts and circumstances of each case.

In the end, he mentioned a number of famous cases like the Satyam Case, and the WhatsApp case to further elucidate his points. With respect to the virtual domain, he questioned the connections which are made in social media platforms like Facebook, LinkedIn and so on. After this, the esteemed speaker Mr. Somasekhar Sundaresan engaged himself in a questionnaire round with the audience. The questions helped the audience get a practical perspective of insider trading in India. He highlighted on the role the connected person plays in the company, and the designation of the insider. More so, when asked about the lacuna in the law he stated that there is no lacuna in the law but rather there is lacuna in the capacity to enforce the law.

The session was summed up by Ms. Nidhi Singh, Member Advisory Board (KCBCL), Panel Counsel, Delhi High Court. She emphasized on the various aspects of the discussion wherein she structured the key takeaways from the sessions. She briefly mentioned the legal provisions which the esteemed speaker spoke about. She placed a strong emphasis on the many components of debate, and she organized the major points from the sessions.

Finally, the session was concluded by the vote of thanks which was delivered by Prof. Mrs. Ipsita Das, Centre Coordinator, KSOL Centre for Business & Corporate Law (KCBCL). The Rapporteurs of the sessions were Mandavi Banerjee, Student Member-4th Year( KCBCL) and Bhumika Saishri Panigrahi, Student Member- 4th Year (KCBCL). Around 90 participants joined the webinar on Zoom Platform.