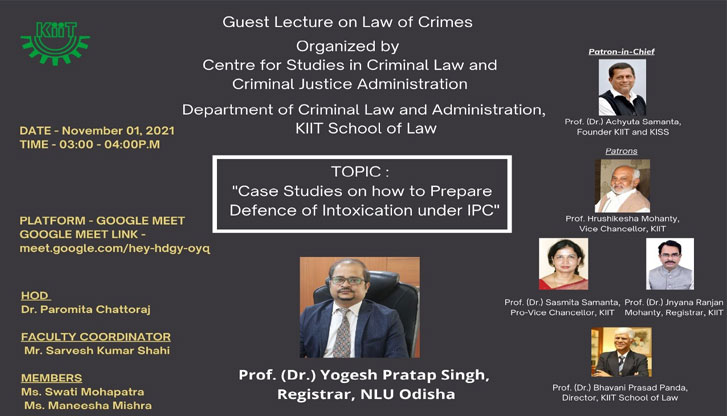 Centre for Studies in Criminal Law and Criminal Justice Administration under the aegis of Department of Criminal Law & Administration, KIIT Law School (KLS) organized a Guest Lecture on “Case Studies on How to Prepare Defence of Intoxication under IPC” on 1st November 2021 for UG students of Law. Mr. Sarvesh Kumar Shahi, Assistant Professor, KLS was the coordinator of the event.

Delivering the lecture, Prof. (Dr.) Yogesh Pratap Singh, Registrar, NLUO, Odisha provided descriptive knowledge of Chapter-4 of IPC, 1860. He discussed section 85 and 86 of the IPC which deals with intoxication and explained the three essentials, which if fulfilled, makes the defence of intoxication applicable.

He also talked about the famous case of Director of Public Prosecutor vs Beard, 1920 King’s Bench and explained how a reasonable man may not be able to use his reasonable senses by intoxication and mentioned the R vs Maid case. He also highlighted the three formulas mentioned by the House of Lords for intoxication. He emphasized on Mens Rea during intoxication of the accused person by explaining the case of Attorney General of Northern Ireland Vs Galekhar, 1963. He also mentioned the exception of the case with reference to Section 84 of IPC, 1860.

He briefly explained about offences of specific intent and basic offences in intoxication. He also talked about the famous case of Basudev vs State of Punjab, 1956 decided by the Supreme Court of India. He mentioned the difference between Section 86 part one and part two and highlighted them. He highlighted the difference between intention of knowledge and the act done. He concluded by saying voluntary intoxication is not a defense for intoxication including drunkenness with keeping in circumstantial evidence.