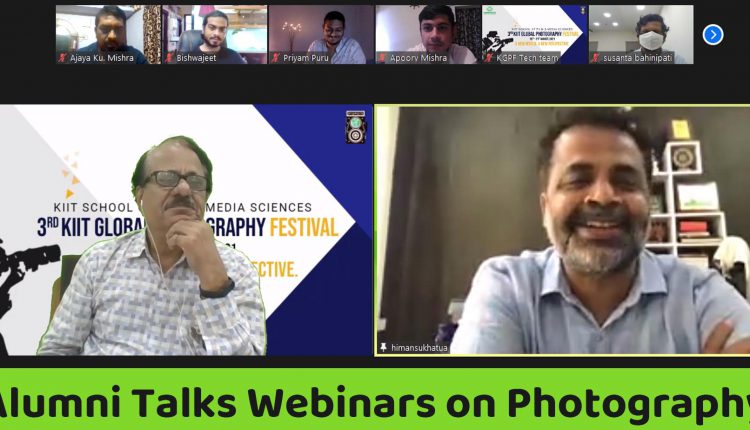 KIIT School of Film & Media Sciences (KSFMS) organized KIIT Global Photography Festival (KGPF) virtually on the occasion of the World Photography Day. A series of alumni lectures, webinars consisting of multiple interesting and interactive sessions based on the theme “A New World, A New Perspective” were held during the three-day festival.

On the first day, national award winning filmmaker and CEO of the School, Prof. Himansu S. Khatua and Professor of Practice, Mr. Jugal Debata, a veteran and award-winning filmmaker, delivered talks on ‘The Art and Craft of Photography’. The ‘Maestro of Canon EOS’, Anoop Guha delivered a talk on “Recent Advancements in Photography”, touching the basics of photography and describing how Canon is developing cameras different from others.

On the second day, an alumnus of KSFMS, Theophilus A. Yeboah, presently a filmmaker in Ghana, talked about his photography experience and the current film industry in Ghana. He shared his passion for filmmaking and photography. The session provided the participants some important practical knowledge about the film industry. The next session of the webinar was taken by Divyam Jha, a film student from Nepal, who shared his view on “Changing Perspective” with connection to photography. The third session was taken by Joel Aarland, a student of KSFMS from Suriname, who shared the experience of his filmmaking journey and the learnings he got from his life at the college that helped him in the practical field. In the last session of the day, Saroj Kumar Dora, Sony Alpha Specialist talked about “Changing Era of Photography and Modern Equipment” while also letting the participants know about the world of Sony cameras. His photographer friend Sameer Ashraf also imparted knowledge on the basics of photography.

On the last day of the festival, an alumnus of KSFMS and filmmaker from Bhutan, Tshering Namgyel presented his talk on “My Journey in Bhutan Film Industry”. He described common attributes between Bollywood and the Bhutanese film industry. His colleague, Kinley R. Dorji, a young Bhutanese actor, singer and composer, who has garnered several awards for his acting in the Bhutan film industry including a national award, set the tone of the event highlighting his acting experience and the work environment. In the second session of the day, another alumnus of KSFMS, Bishwajeet Pattnaik, a filmmaker based in Bollywood, shed the light not only on his journey, but also the art of composing photographs.

The webinar series of the festival ended with a word of appreciation by Prof. Himansu S. Khatau and Mr. Jugal Debata. They pointed out the essence of being courageous enough to practice and learn regardless of the situations, and thanked the entrants for participating in the event. Prof. Khatua thanked and appreciated the meticulous planning and hard efforts of the convener and Coordinators Mr.Susanta Bahinipati, Mr Ajaya Kumar Mishra, Mr Ganeswara Mohapatra, all staff of Film School including Mr. R. K. Baral, AO, Mr. C M Sahoo, PS to CEO and above all the student Coordinators and volunteers and the entire KGPF team for the success of the festival.