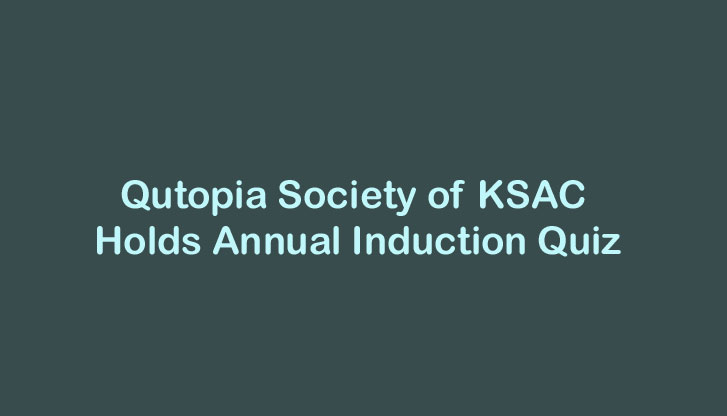 Qutopia, the official quizzing society of KIIT-DU functioning under KSAC, recently organized its virtual Annual Induction Quiz event, Launchpad 2k21, on the 30th – 31st October, 2021. The mega quizzing affair received overwhelmingly positive responses from all the Schools of the University. The sponsors were LOOM CIRCLE, an apparel company, and PAGEBYPAGE.IN, an Instagram-based stationery company.

Around 1034 students registered for the event. It was held over the Zoom platform and the participants were in a neck and neck competition with each other. The quiz consisted of two rounds, the first being prelims and then the finals. After witnessing a high octane battle for prelims on the 30th October, the top eight teams qualified for the grand finale. Subham Pattnaik, a senior member of the society was the quizmaster for the preliminary round of the event. The finale of the event was held on the 31st October, and there were four rounds. It was jointly hosted by Shubham Pattnaik and Gaurav Sahoo, both being senior members of Qutopia.

The quizzing vigor of all the top eight teams was on full display. After the intense two-hour battle for the coveted crown, team Cheems Lomvers emerged victorious, comprising of Adarsh Raj Singh and Rachit Verma (2nd years), followed by Team Nimo comprising of J Rohan and Pragya Pranjal (2nd years) as 1st Runner’s up and Team Quiz Ninjas comprising of Amit Kumar Garnaik and Roshan Kumar (1st Years) as 2nd Runner’s up. All the winners will receive Prize money and also coupons by the two patrons, LOOM CIRCLE, and PAGEBYPAGE.IN. The curtains were drawn by the presentation of word of thanks by Gaurav Sahoo, the coordinator of the society who highlighted that such events enliven the thriving quizzing drive amongst youth and also hoped for such an overwhelming response in the future. Dr. Shyam Sundar Behura Dy. Director Student Services congratulated the winners and thanked team Qutopia for keeping up the quizzing culture in the University

Workshop on Stock Market by Kraya & Kuber Society of KSAC