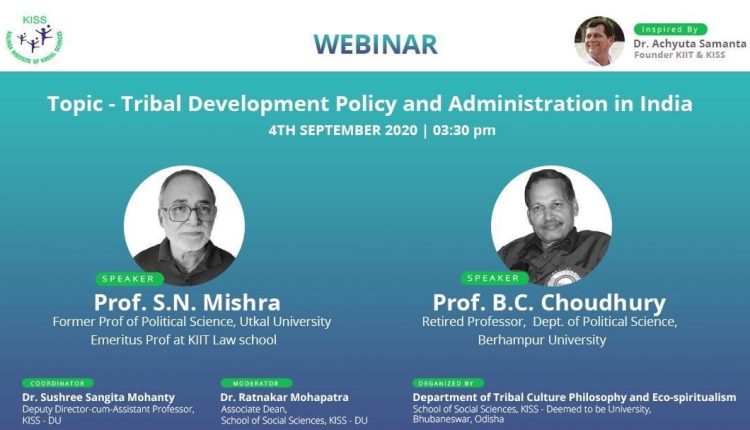 The Department of Tribal Culture, Philosophy and Eco-spiritualism, School of Social Sciences, KISS Deemed to be University organized a webinar on ‘Tribal Development Policy and Administration in India’. The topic covered important areas like tribal culture, tribal philosophy and tribal history.

Speaking at the webinar, Prof. B. C. Choudhury, Retired Professor, Department of Political Science, Berhampur University elaborated on tribal cultural and legal identity with special reference to Odisha. He listed some of the common traits of the tribals as researched by anthropologists across the globe and threw light on the projects of the Modified Area Development Agency (MADA), which is implementing projects like irrigation, livelihood and mining.

Stating that tribals have been under burden for long and their development is the need of the hour, Prof. Choudhury opined that initiatives like English labs and sustainable agriculture can help elevate their socio-economic condition. “KISS is a front runner in this as it has been addressing these issues since its inception”, he said. He also touched upon the displacement issue.

Highlighting the approaches, plans and policies for tribal development in India, Prof. Surya Narayan Mishra said, “The tribal administration has a long history. It started much before India’s independence. Tribal development administration has evolved over the years with changes in the Scheduled Areas and among tribal people. New strategies and policies have been initiated to address emerging challenges.” He also drew comparisons from the tribal communities of the neighbouring states – Jharkhand and Madhya Pradesh. Prof. Mishra also described some of the challenges and difficulties faced by the tribals since the British rule.

Earlier, welcoming the speakers, Dr. Prashanta Kumar Routray, Registrar, KISS – DU briefed on tribal rights and development and urged the need for planning on these issues both at the micro and macro level. The webinar was followed by a question and answer session. Dr. Ratnakar Mohapatra proposed the vote of thanks and expressed gratitude to both the speakers for gracing the webinar.