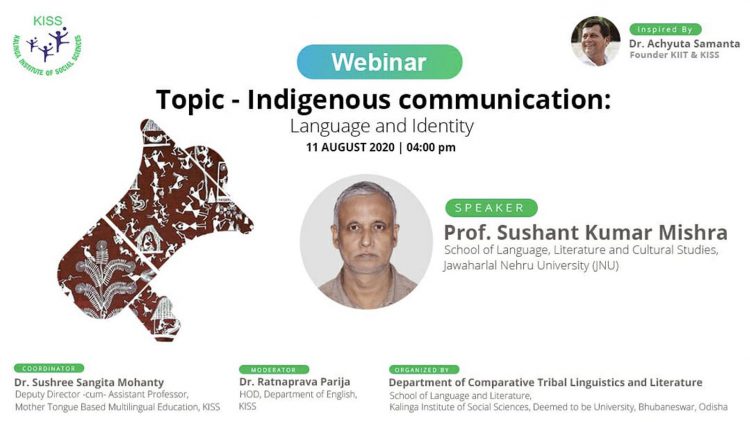 The webinar aimed at covering communication in tribal societies and how it has shaped the history and culture of the world. It took the participants on a journey of the European and Asian countries to trace how the indigenous communication evolved over time and new identities formed in the process of exchange of communication tools and habits.

Prof. Mishra threw light on the differences between the indigenous people and new people through an example showing the connection between language and identity. “A woman namely Malinche, who hailed from some noble family of the indigenous origins, was sold to the Spaniards and the communication she facilitated had an important role in the conquests in Americas and later in the new identity of the people of America”, he narrated.

In his welcome address, Prof. Harekrushna Satapathy, Vice-Chancellor, KISS Deemed to be University introduced the guests and spoke on tribal linguistics in highlighting semantics and semiotics. He also drew etymological references for presenting a broader perspective to the audience. The inspiring webinar was attended by faculty members, research scholars and students of KISS-DU. It was also participated by distinguished academicians and guests from within and outside the state. The discussion was followed by a question-answer session.

Dr. Prashants Kumar Routray, Registrar proposed the vote of thanks. He praised the speakers for keeping the facts on the table and helping the participants approach the topic from multiple perspectives. The webinar was coordinated and moderated by Dr. Sushree Sangita Mohanty, Deputy Director-cum-Assistant Professor, KISS, Mother Tongue Based Multilingual Education, KISS-DU and Dr. Ratnaprava Parija, Head, Department of English, KISS-DU.

Olympians Felicitated at KIIT Two Stadiums of KIIT to be…