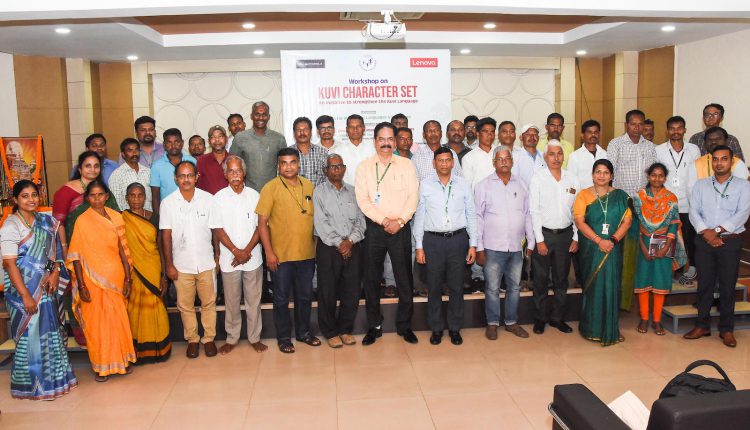 The once widely spoken KUVI indigenous language in states such as Odisha and Andhra Pradesh is listed as an endangered language by UNESCO. To give fresh vitality to the language and increase its day-to-day usage, the Kalinga Institute of Social Sciences (KISS) Deemed-to-be-University organized a workshop here, inviting linguistic experts from the State and outside.

In his welcome address at the workshop titled ‘KUVI Character Set’, KISS Vice Chancellor Prof Deepak Kumar Behera said the workshop will try to develop a character set for the KUVI language and bring in commonalities between the states where the language is spoken. He said the Founder of KISS has built this wonderful institute to provide education free to all tribal students.

The Registrar of KISS Dr Prashanta Kumar Routray gave his closing remarks at the workshop, organized in collaboration with the Lenovo Foundation and Motorola. This year KISS-DU took KUVI Language as the central focus.

UNESCO regularly publishes a list of endangered languages, based on a 5-scale classification system such as: vulnerable, definitely endangered, severely endangered, critically endangered & extinct. Keeping this in mind, KISS is trying to create an interface where the youth and younger or future generations could get involved and increase the usage of their home/mother tongue so that the endangerment of the languages can be reversed.

Kalinga-Stockholm Centre for Excellence in International Affairs Inaugurated at…