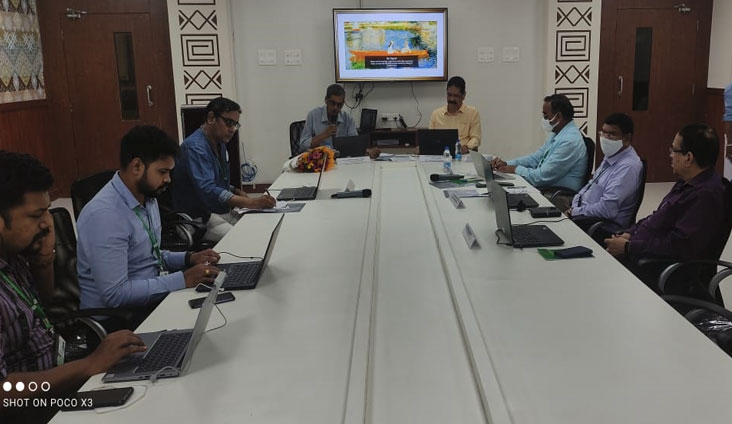 The Internal Quality Assurance Cell (IQAC) of KISS Deemed-to-be-University (KISS-DU) organized an invited lecture on ‘Aspects of Academic Writing’ on 8th October 2021, under the Invited Lecture Series. Professor Jatindra Kumar Nayak, Professor Emeritus, KISS-DU and former Professor of English, Utkal University addressed the participants in a blended mode. Professor Nayak has won the KATHA Translation Award in 1997 and the Hutch-Crossword Book Award in 2004. His English translations of classic Odia novels have been published by the University of California Press, Oxford University Press, and Penguin Books. Professor Nayak is a member of the English Advisory Board, Sahitya Academy and Editor-in-Chief, margAsia, a biannual journal devoted to exploring Asian literature and culture.

In his welcome address, Professor Deepak Kumar Behera, Vice-Chancellor, KISS-DU greeted and introduced the distinguished speaker. He also welcomed the Professors Emeritus and academics from different universities, and the members of the United Indian Anthropology Forum (UIAF) who were the online audience.

Professor Nayak spoke on the topic ‘Aspects of Academic Writing’ in a very lucid and engaging manner. His lecture focused largely on why academic writing as a scholarly tradition could not strike roots in the humanities and social sciences at the college and university level. To search for the reasons for this deplorable phenomenon, Professor Nayak dwelt on the historical and cultural context of academia in Odisha. The idea of university as a centre of research and a site of knowledge production was then alien to the academic community not just in Odisha and India, but also all over the world. As a student, Prof Nayak had come in contact with brilliant professors at Ravenshaw, namely K.S.R. Murthi, Altaf Hussain, Sarbeswara Das and many others. They seldom wrote academic books or papers.

In fact, for a long time erudite scholars of eminence at Oxford and Cambridge wrote books and essays as a labour of love, not out of compulsion. In the Odishan context, Natabara Samantaray and Krushna Chandra Panigrahi, the authors of famous scholarly books, were an exception, not rule.  The idea of university to be a centre of knowledge production is attributed to Wilhelm von Humboldt, the great German scholar. This brought about far-reaching changes in the culture of academia, with academic writing getting deeply embedded in the tradition of scholarship.

While research is now the primary concern of universities all over the world, the new imperatives of academic writing as part of scholarly discipline still remain ignored in our context. From his reading of a vast number of Odia autobiographies, Prof Nayak opined that scholarship has never been the ambition of the educated Odias. Unlike the Presidency College, which was a home to Nobel laureates like C.V. Raman, Amartya Sen and Abhijit Banerjee and the science luminaries like Satyen Bose and Acharya Jagadish Chandra Bose, Ravenshaw College could never be a habitat for scholars of such stature. Therefore, Cuttack remained a large village throughout, but could not grow as a cultural metropolis like Calcutta.  It had only printing presses, but no publishing houses to boast of. The scenario has not changed yet. Except for marketing books, no world class academic publishing house has set up production units, even in Bhubaneswar. In addition, a culture of celebrating civil servants rather than scholars prevails in Odisha, and, unfortunately, the academic standard of universities is assessed in terms of the number of civil servants produced there. After all a scholar who becomes Bhatnagar awardee or becomes a member of the prestigious British Academy Fellow or the National Academy of Science testifies to the academic quality of an institution, not a civil servant. All these factors combine to produce a climate most ill-suited to a proper scholarly climate where academic writing would naturally grow.

Academic writing is a solitary, unglamorous and painstaking affair, and it yields little pleasure. Nevertheless it can be leavened by the “emotion of scholarship”, Prof Nayak said, quoting Nirad C Chaudhuri. In absence of this, all our academic writing becomes laboured, and also unoriginal. To rectify this situation, Prof Nayak stressed the need for building archives of scholarly materials for research in humanities and social sciences.

Since academic writing is neither fiction, nor creative non-fiction, it is to be guided by certain conventions and based on skills of achieving clarity as well as coherence. Prof Nayak put stress upon the teaching of the basic skills of academic writings such as indexing, copy editing, proof reading etc. in the universities. Without the requisite skills and knowledge of the conventions a student falls prey to the seduction of jargon-ridden, pretentious and convoluted expressions, and an unintelligible style which, they mistakenly believe, are the distinctive features of excellent academic writing. Prof Nayak illustrated this point by citing the notorious ‘Sokal hoax’. One of the chief reasons for the awful standards of writing ability is the collapse of the high school system, he added.

The lecture was summed up by Professor Ashok Kumar Mohapatra, Sr. Professor, KISS-DU, while Dr. Prashanta Kumar Routray, Registrar offered a vote of thanks. He also thankfully acknowledged the efforts made by the organizing team and the participants for making this third lecture a success.

Day-2 of Webinar on ‘Indigenous Youths in Institutions of Higher Learning: Their…

Webinar on ‘Indigenous Youths in Institution of Higher Learning: Their Wellness,…