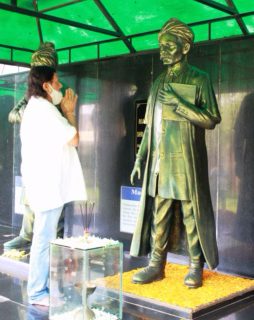 The occasion was graced by Professor Prafulla Kumar Mohanty, former Principal of Ravenshaw (Autonomous) College and recipient of the prestigious Central Sahitya Akademi Award in the year 2004 for his book ‘Bharatiya Samskruti O’ Bhagavad Gita (Indian Culture and Bhagavad Gita). Drawing reference from history, Professor Mohanty stated  that earlier there was a culture of ‘Ji Hazuri’ (‘Yes Sir’) in the State and the writings were confined to poems and literature only. He opined that this triggered a feeling of being cheated in the people, especially in the legal system. With the return of Utkal Gourab Madhusudan Das from Bengal came the winds of change and led to the social, economic and industrial development of Odisha. Referring to his early life, he threw light on the struggles of Madhusudan Das and how he emerged as one of the greatest leaders Odisha has seen. Quoting the words of Madhusudan Das “Education will lead you to life essence and not effervescence”, he said that physical poverty will lead to cultural poverty and education plays an important role in eradicating poverty. “I am impressed that the KISS model is walking on the path shown by Utkal Gourab Madhusudan Das by providing education as a means to eliminate poverty in the tribal districts”, added Professor Mohanty.

Earlier, in his welcome address, Professor Deepak Kumar Behera, Vice-Chancellor of KISS-DU said, “Utkal Gourab Madhusudan Das was a strong votary of Self-Sufficiency which we know as ‘Atma Nirbhar’ today. It is the concept of self-sufficiency which infused the drive for industrialization in Odisha”. Dr. Achyuta Samanta, Founder of KIIT and KISS with a noble thought and foresight established the four research chairs like Madhusudan Das Research Chair, Bhima Bhoi Research Chair, Gopabandhu Das Research Chair and Biju Patnaik Research Chair, added Professor Behera. Professor Jugal Kishor Mishra, Chair Professor, Madhusudan Das Research Chair introduced the distinguished speaker, and expressed his gratitude to Professor Prafulla Kumar Mohanty for gracing the occasion. He paid homage to the iconic leader and underscored significant contributions of Madhu Babu. Further, he also clarified the need for maintaining quality in the academic and administrative activities of educational institutions.

Proposing the vote of thanks, Dr. Prashanta Kumar Routray, Registrar of KISS-DU said, “The vision of KISS is not only to educate the tribal students but also to help people get a flavour of the work this pristine institution is doing since the last 28 years. Many great sons of the soil have contributed to the state of Odisha and now the onus lies on the coming generations to keep up the good work they have done for the State. KISS has shouldered the responsibility of studying and doing research on the life and works of these leaders and we at KISS believe that it is our way of paying tribute and respect to their contributions”.

Lecture on ‘Cultural Sustainability and Anthropology’ at KISS-DU