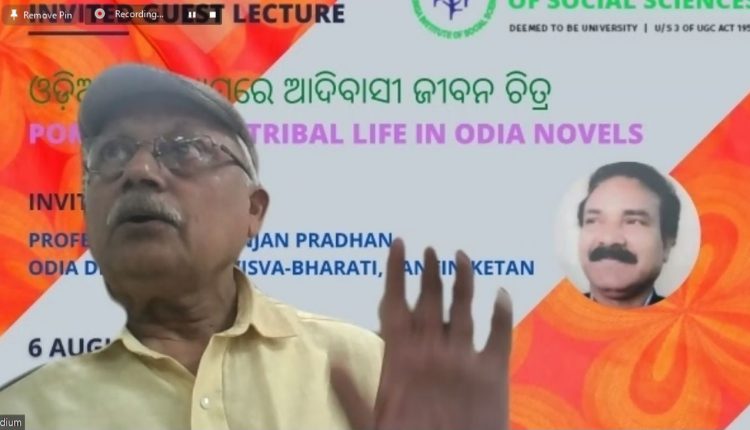 A Lecture on Portrayal of Tribal Life in Odia Novels

The School of Comparative Tribal Languages and Literatures, KISS-DU organized a lecture on ‘Portrayal of Tribal Life in Odia Novels in blended mode on 6th August 2022. Professor Manoranjan Pradhan, Odia Department, Visva Bharati was invited as the distinguished speaker.

In his introductory remarks, Professor Deepak Kumar Behera, Vice-Chancellor, KISS-DU briefed on the importance of the topic for the students and scholars. He spoke about the necessity of research and publications related to key areas of different tribes and their languages. In his informative speech, he gave remarks on noted Odia novelists such as: Pratibha Roy, Bibhuti Pattnaik and Gopinath Mohanty and suggested incorporating auto ethnocratic writing by tribal scholars. He also advised on inclusion of research topics related to all 62 tribes of Odisha.

Speaking on the occasion, Professor Bijayananda Singh, Gopabandhu Chair, KISS-DU, praised the efforts taken by Dr. Achyuta Samanta, Founder, KISS & KIIT. He also presented his views on the role and importance of Visva Bharati University towards tribal life and culture and shared some of the major milestones achieved by the speaker.

Professor Manoranjan Pradhan threw light on the roles and responsibilities of a student. He mentioned the bond and connection between Santiniketan and tribal language and culture from the very beginning. Out of five thousand nine hundred novels in Odia only sixty-two are there on tribals not even covering all tribes of Odisha, he stated, while exhorting the participants and researchers to take the issue seriously. In addition to this he beautifully explained the novels by noted Odia novelist Gopal Ballabh Das and his sacrifice in the field of tribal life and culture. Appreciating the role of the novelist, he said that a true writer never waits for rewards in his life.

Speaking on the occasion, Professor Emeritus Nirmal Chandra Dash shed light on the simple lives of tribal people from anthropological perspective and asked all the intellectuals to be motivated by the Founder, KIIT & KISS. Dr. Rasmita Tripathy, Dean, School of Comparative Tribal Languages and Literatures, KISS-DU spoke on the importance of research in this area related to different tribes and its literature and offered a formal vote of thanks to everyone. Dr. Pramodini Jena from Odia Programme coordinated the event.