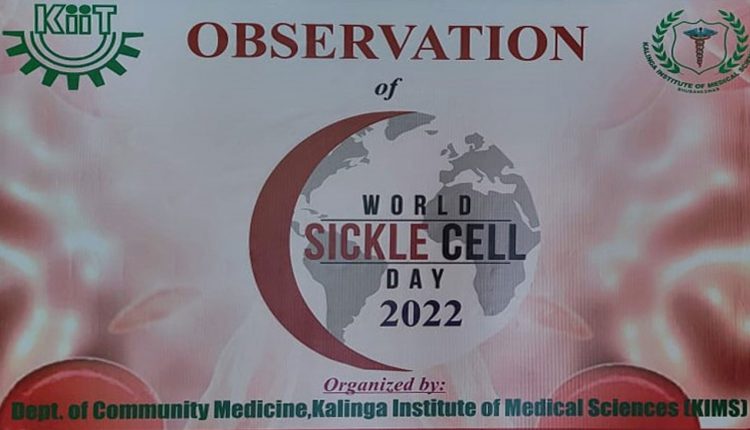 Before planning for pregnancy, parents carrying the traits of Sickle Cell Disease (SCD) should always go for tests to know whether their future child would be suffering from SCD or not. They must also consult a genetic counselor or their physician as there are chances that in 50 percent of cases the child could be a carrier and in 25 percent of cases, could be normal.

Associate Professor in the Department of Paediatrics of city-based Kalinga Institute of Medical Sciences, Dr. Palash Das, said “awareness of SCD is very important as this genetic disorder could show difficulties in lifestyle. If parents could know the genetic status of the future kid and terminate the pregnancy at the earliest, they could wait and have a child who doesn’t have SCD so that their kid could lead a better life,’’ she observed.

Speaking on the occasion of the World Sickle Cell Disease Awareness Day on June 19, the pediatrician said “SCD is a genetic condition in which the red blood corpuscles (RBC) of the child would be in a shape of a “sickle”, which is used while, cutting paddy or wheat crops by farmers. While a normal RBC is in the shape of a ‘vada’ or doughnut, in the SCD it is sickle-like and causes difficulties for the kid once it crosses six months to one year of age.

“In fact, immediately after birth the child appears normal, but once it grows then swelling of fingers, toes, inflammation, anemia, enlarged spleen, severe infections and pneumonia, brain stroke, and even paralysis is reported. In fact, the sickle-type RBCs cause blockage in the flow of blood and the resultant is the condition. So, to keep the babies out of danger the SCD trait carrier parents must go for tests before pregnancies,’’ she explained.

The major manifestations of SCD are brain strokes, acute chest syndrome and life-threatening infections, and a series of micro infections in the spleen that would cripple the life of the child. Under the long-term manifestation of the SCD avascular necrosis (AVN) of the hip, retinopathy, and life-limiting factors due to a multitude of problems in the body could put the life in danger for the kid and also put the parents under tremendous mental trauma.

Regarding the SCD cases reported in Odisha, the pediatrician said “areas like Kandhamal, Kalahandi, Sundargarh, Sambalpur, Angul, Talcher, Dhenkanal, and some parts of southern Odisha are vulnerable due to the prevailing social costume, genetic make-up, and inbreeding. Some parts of the coastal Odisha are also reporting SCD cases.’’

In the international arena, while Nigeria, Congo, and India are the top three nations with the SCD diseased populace, the Chota Nagpur Plateau comprising parts of Madhya Pradesh and Odisha reports every 3 out of 100 cases in the country. In an overall estimation while in India 4.3 percent are suffering from SCD, in Odisha it’s 9.1 percent.

Regarding the treatment for SCD, Dr Palash said “the parents after discovering the condition in their child should come to a good pediatric center for early and effective treatment. Early vaccination also helps in the treatment process. A lot of research is ongoing across the Globe and a genetic treatment is already in the pipeline.’’

However, pointing at the poor awareness level even in case of parents having SCD kids, she added that the parents can also avail the Persons with Disability (PWD) certificate for their wards so that the little ones could get help from the Government in different welfare schemes, getting higher education and jobs in public sectors.