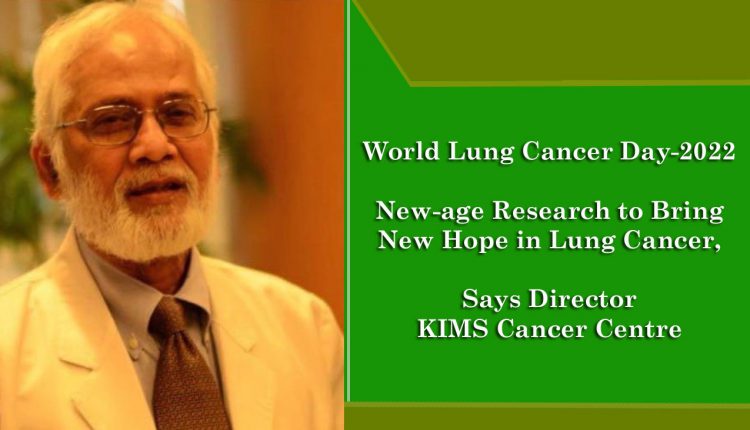 Speaking on the disease progression, detection, and the trend on the occasion of World Lung Cancer Day, 2022, Prof Mohanti, who is heading the ultra-modern centre for cancer care under the city-based Kalinga Institute of Medical Sciences (KIMS), said “Overall lung cancer now ranks within the top five cancers in Odisha as it comes in the rank of five followed by stomach, mouth, breast and cervical cancers. However, in males, while stomach and mouth come in the top two ranks, lung cancer comes the close third.’’

The renowned oncologist, who has long years of experience in cancer management while serving at AIIMS Delhi and top Indian oncology centres and had also served as an expert for the International Atomic Energy Agency (IAEA), Vienna, Austria and European Commission’s Health-Cancer area activities, Brussels, Belgium however, said “there is no population-based cancer registry in Odisha to know exactly how many are suffering from what type of cancers in the state. However, now the Government of Odisha has started the move to make it happen so that we can get a correct picture  of the cancer burden and cancer types in near future.’’

Lung cancer is mainly caused by smoking activity, tobacco chewing and occupational hazards like chemicals, environmental pollution and genetic factors which combine fly influence the disease progression. He, however, added that “all these combined take several years to develop the disease the reason for which it is commonly diagnosed at 50 years or higher in a person.’’

However, in the Western population, as per Prof Mohanti, lung cancer cases are rising in non-smokers and non-tobacco users and it has become a concern that could, perhaps, be linked to pollution, genetic and other lifestyle external factors.

Specifying the Stages in lung cancer, he, however, added that if detection is done in Stage-III the survival could be 30 percent and during Stage-IV could be 5 percent or even less.

As per the treatment modality while in the early stage the treatment process would involve surgery and radiotherapy, during a later phase it could be chemotherapy and radiotherapy. However, in some advanced stages despite the chemo and radiotherapy if there is no substantial improvement or the patient needs support for daily living, palliative care (scientific pain and symptom management) becomes the choice of medical care.

Regarding some general symptoms of lung cancer, the expert said breathing difficulties, weight loss, fever and pain in the chest for a quite long time of a few weeks or months might give some doubt and the person concerned must go for the tests so that early detection of lung cancer might help in a healthy survival. However, these patients need to have consultations with adequately trained chest physicians and cancer experts for special care and attention.

The newly-inaugurated KIMS Cancer Centre, a super specialty center for holistic cancer care has integrated all the departments of a modern cancer care facility. It has state-of-the-art Medical Oncology, Surgical Oncology, Nuclear Medicine, Radiation Oncology, and Palliative Care Departments functioning under qualified experts under the leadership of Prof Mohanti.