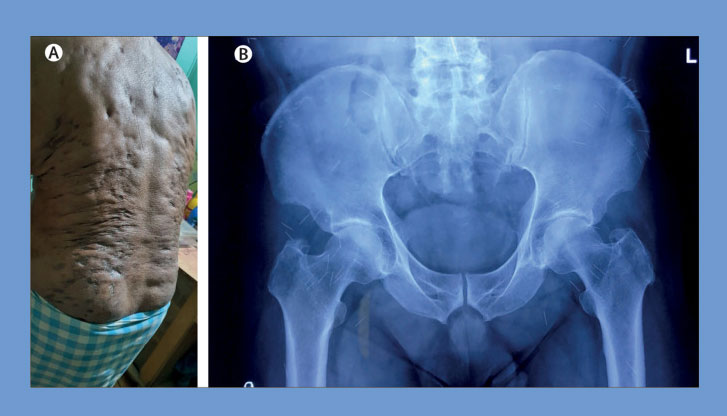 Lancet Publication by Department of Rheumatology and Psychiatry, KIMS Pentazocine-induced Fibromyositis: A Case of Scleroderma Mimic

A 60-year-old man was presented with complaints of progressive skin tightening in his trunk and painless restriction of movement in all four limbs for the past five years. He had no co-morbidities and no family history of neuromuscular diseases. He had no history of Raynaud’s phenomenon. Physical examination revealed contractures in the upper and lower limbs as well as woody skin, multiple indurated scars, hyper pigmented patches, surface atrophy, and muscle fibrosis, with multiple puncture marks on the trunk suggestive of systemic sclerosis. His hands and feet were spared and there was no sclerodactyly. His general physical and systemic examinations were within normal limits. Laboratory investigations, namely complete blood counts, acute phase reactants, urine examination, as well as blood sugar, liver, and kidney function tests were within normal limits. He tested negative for HIV, hepatitis B, and hepatitis C. His antinuclear antibody (ANA) test was negative. His nail fold capillaroscopy findings were normal.

Because of the patient’s history of lower back pain, the KIMS treatment team comprising of doctors from the Department of  Rheumatology and Psychiatry, who did a radiograph of his pelvis that revealed the presence of hundreds of broken needles. On repeated enquiry, it was learned that the patient had been injecting himself with pentazocine for relief of knee pain for the past three decades and on stopping he had episodes of withdrawal symptoms such as craving, anxiety, restlessness, nausea and vomiting, sweating, and tachycardia. After initial symptomatic treatment for opioid withdrawal, he has been under tapering buprenorphine maintenance for the past year.

Currently he is abstinent from pentazocine addiction. Pentazocine-induced skin fibromyositis is rare, with only three cases previously reported in the literature. The common differential diagnosis is scleroderma-related disorders. Absence of Raynaud’s phenomenon, sclerodactyly, and normal nailfold capillaries with negative ANA test ruled out systemic sclerosis. The proposed mechanisms for pentazocine-induced skin side-effects are: repeated trauma by the injections, vasoconstriction with local tissue ischaemia, and inflammation due to precipitated drug in tissues. Broken needles have not previously been reported to lead to fibrosis, but a previous case reported formation of foreign body granulomas. Our patient received gentle active and passive muscle stretching exercises with minimal improvement in his skin condition.

In this patient, hundreds of needles were found to be present in situ, which is a potential focus of infection, pain, and risk of displacement, posing tremendous risk. The team of doctors did not try to remove the retained needles due to apparent chronicity of the findings and operating difficulty. Fluoroscopy could be used to locate broken needles during the removal procedure; however, to remove hundreds of needles by doing invasive surgery is a difficult task because of the inherent risk of needle displacement or migration, which can lead to injury of internal organs, nerves, and blood vessels. Cases of broken needles retained inside the body have been described previously as complications associated with acupuncture. In most cases these needle fragments might remain in situ forever without problems. Although these needles occasionally migrate, especially in patients without much body fat, they usually do not result in complications. The doctors educated the patient regarding the imaging findings to ensure that he can alert us if any problem arises due to needle displacement or migration, which could result in acute damage. The Doctors will image the patient’s abdomen and pelvis (via orthogonal x-ray or CT scan) every six months to monitor migration.

The case was managed as well as the treatment was done by Dr. Jigyansa Ipsita Pattnaik, Dr. Jayaprakash Russell Ravan, Dr. Debashis Maikap and Dr. Prasanta Padhan,  from  the Department of Rheumatology and Psychiatry, KIMS.