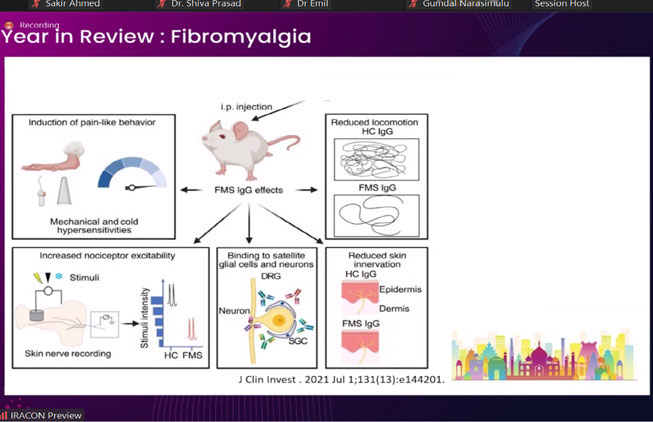 The Department of Clinical Immunology and Rheumatology, KIMS took an active part in the National Rheumatology Conference IRACON 2021 held from 5th to 12th December 2021.

They were led by Prof. Ramnath Misra, Head of Rheumatology and Dean R&D, KIMS. He is the Editor-in-Chief of the Manual of Rheumatology, the official textbook from Indian Rheumatology Association (IRA). He presented the progress on the current edition of the book at the inaugural meeting. Being one of the pioneers of musculoskeletal ultrasound in India, he chaired the workshop on MSK USG held on 9th December. He also featured in a “Meet the Professor” session, in which residents and fellows from all over the world could interact with him. He also presented multi-centric work on the humoral immunogenicity of SARS-CoV-2 in patients with autoimmune disease. He had led the study that included Bhubaneswar, Kolkata, Mumbai, Bangalore and Ahmedabad.

Dr. Sakir Ahmed, Associate Professor of Rheumatology was a speaker in the Translational Immunology workshop. He spoke on “T-regulatory cells and CAR T cells” and their practical use for autoimmune diseases. Dr. Sakir was also a speaker in the main conference as an invited speaker. His talk was titled “Fibromyalgia: Year in Review”. He was the chairman of the session on “Long COVID” which featured Dr. Avindra Nath, Director of NIH:National Institute of Neurological Disorders and Stroke.

He presented work on Gut Microbiota in reactive arthritis at a platform presentation and was awarded the second best abstract in the whole conference for work in basic sciences. Prof. Misra and Prof. Padhan are also co-investigators in this work for which Dr. Sakir had received an international grant.