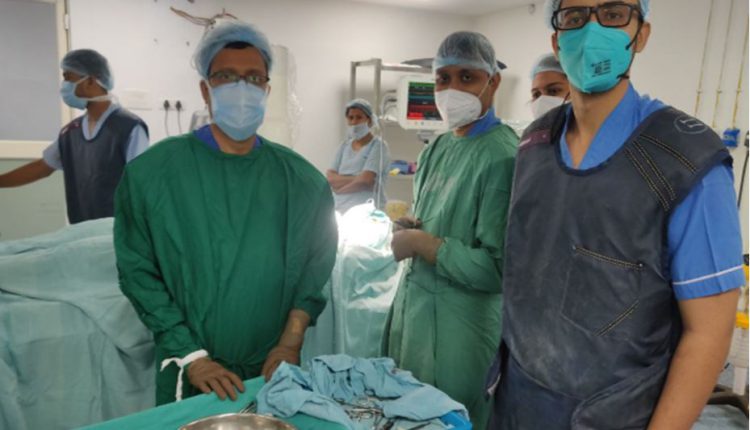 KIMS Removes Metal Shard from Neck of a Man

A patient was referred to Kalinga Institute of Medical Sciences (KIMS) from Ordnance Factory Hospital with a history of pain and tenderness in the left side of neck for one week following an episode of a small metal shard entering his neck while hammering a metal bearing of industrial equipment.

The patient was carefully examined by Professor (Dr.) Kabikanta Samantaray and Dr. Nishikanta Pradhan, Asst. Professor of KIMS. He was found to have an entry wound of approximately 0.5 x 0.3 cm, showing signs of inflammation (redness, local rise of temperature, and tenderness on palpation) on the left side of neck approximately 3 cm from the midline, at the level of thyroid notch. As a consequence, Computed Tomography was ordered to know the exact size and location of the metal shard. It was 4mm x 1mm just at the insertion of the left sternocleidomastoid.

Neck being a highly vascular area with major blood vessels, nerves and muscular spaces, with potential risk of injury and dislodging of the shard during intervention, removal was planned to be done in Operation theatre under X-ray image intensifier (C-Arm) guidance.

The procedure was performed in local anaesthesia with sedation under all aseptic conditions. The shard was located with C-Arm guidance and was found to be 3cm inferior and lateral to the initial expected position (entry wound). The shard was removed after meticulous dissection of the neck, in conjunction with C-Arm guidance. The chief surgeon was Professor and HOD (Dr.) K. K. Samantaray assisted by Dr. N. K. Pradhan, Dr. Swatee Dash, Dr. S. S. Poojyata and Dr. Arnav.

The patient was kept in observation for a period of six hours and later discharged on oral medications. It was accomplished by the combined efforts of doctors, nurses, and hospital staff of KIMS so that this arduous procedure was brought to fruition avoiding a potential life threatening outcome.