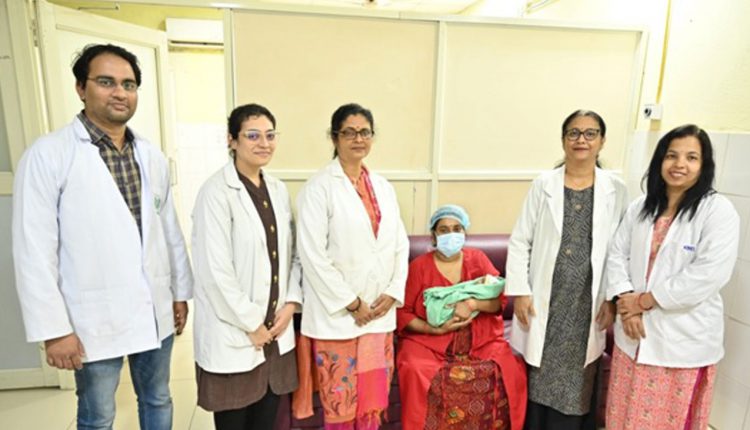 Pravati Beura, a 31-year-old mother from Kendupatna in Odisha’s Cuttack district is perhaps the happiest woman on Earth. Thanks to the untiring efforts of the experts at the Department of Obstetrics and Gynecology of Kalinga Institute of Medical Sciences (KIMS), Pravati has become a proud mother now, even though one of her twin pregnancies was stillborn on October 29th, but after 52 days of the incident, the second foetus, was delivered safely by the doctors.

This is perhaps the first of its kind in Odisha and “a rarest of the rare case’’ in which after the expulsion of the first twin at 23 weeks of gestation the pregnancy continued with the second twin up to 31 weeks and two days. This unique distinction has brought KIMS to the limelight once again for its unique facilities in handling high-risk pregnancies, backed by a competent and able neonatal backup infrastructure with the neonatal intensive care unit (NICU) of its Paediatrics wing.

Pravati lost her first foetus on October 29th, a female child of 550 grams only as she was admitted with some complications following her IVF pregnancy. Still, though she was having uncontrolled diabetes, obesity and hypothyroidism, the gynecologists took a huge challenge to save the other twin and kept the mother under strict antiseptic regimen, constant supervision and monitoring till she delivered the second foetus, a male child, on December 19 with 1,370 grams. Still in, NICU the baby, however, is doing exceptionally well along with her happy mother.

HOW RISKY IT WAS?

From medical literature world over and India it is seen that in India such high-risk twin pregnancies were managed in two or three cases and there was not a single instance from Odisha.

“The two gestational sacs in the mother’s womb in Pravati’s case was an added advantage for us, due to a twin foetus and following the birth of still-born baby girl on October 29 we took the risk with all precautions and wanted to monitor the mother, the foetus and her parameters. The challenge was more as the mother had come from an outside IVF centre with a hope that we are the best managers during such cases in Odisha,’’ said Prof Jyotshnamayee Panda, HoD of O&G Department.

“Another greater challenge was the placenta of the first delivery did not come out and some other complications occurred and still we did not give up and were successful in having the success natural delivery of the second foetus,’’ said Prof Pramila Jena, a leading Faculty member of the Department, who carried out the delivery.

The faculty members of O&G at KIMS are of the opinion that the basic philosophy of patient safety and patient care has always been a top priority and hallmark of KIMS and with a proven track record majority of the high-risk pregnancies are thus, finding their ways to the O&G Department. The second assurance is always there from a highly successful team of neonatologists at the Paediatrics Department, who put all their energy in helping in the survival of premature babies.

“We already have a High-Risk Pregnancy Monitoring Committee at KIMS. As the medical college believes in a collective decision-making process for better safety for the mothers and their children, active participation from O&G, Paediatrics (neonatologists) and support from NICU have made the process of handling the challenge of high-risk pregnancies, more smooth and technically valid,’’ explained HoD Prof Panda.

HOW IS THE BABY?

As the team of Neonatologists of Dr Santosh Panda and Dr Manas Nayak are leading the neonatal backup process at KIMS after the delivery, the baby and its mother, both are doing fine. “Just after the childbirth on December 19 the baby had some mild respiratory distress as it was only 1,370 grams. After oxygenation for 48 hours the baby is fed through the nasal route. However, once it reaches 1,750 gram it can feed through its mouth and following observation both the mother-child can be released,’’ said Neonatologist Dr Manas Nayak.

The mother, Pravati, in her reaction, said “I had lost all hopes after knowing the fate of the first child, but the O&G experts and pediatricians of KIMS have done a miracle and could save the second child. I am really indebted to them.”