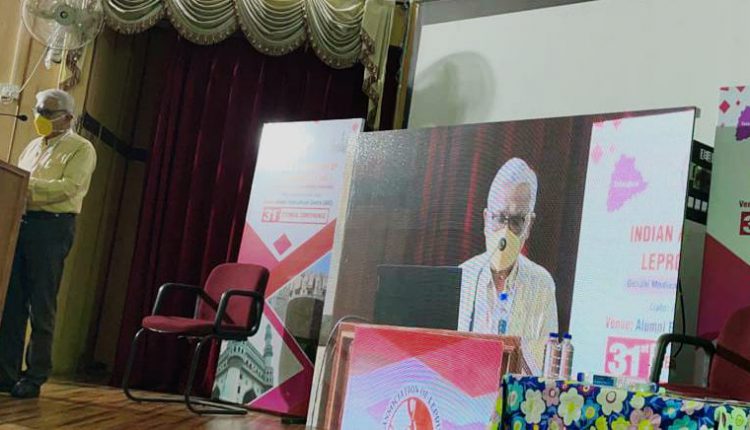 The 31st Biennial Hybrid Conference of the Indian Association of Leprologists (IAL) was held in Hyderabad from April 16 – 18, 2021. The conference was attended online or physically by dermatologists and leprologists, including researchers and post graduate students of dermatology from all over the country. Prof. Dr. Hemanta Kumar Kar, HOD, Department of DVL, KIMS, Bhubaneswar was invited to deliver a plenary talk on “Late Detection / Undetection of Lepromatous Leprosy Cases, Is it a Concern for Slow Reduction of Prevalence of Leprosy in India”.

In his talk, Prof. Kar suggested modifying the national strategy based on the outcome of the study for reduction of prevalence rate and new case detection rate in India. New cases including infectious LL cases can be picked up early utilizing more than 12,000 dermatologists of the country through house to house search as done in polio vaccine drive in India annually or twice a year with the help of government state medical and paramedic personnel and NGOs like ILEP working in India.  LL cases are difficult to diagnose clinically by the medical officers and paramedics without the help of dermatologists.  He also suggested the reintroduction of skin smear examination for confirmation of suspected LL cases at PHC level. This way, all untreated leprosy cases can be picked up early and multidrug therapy initiated to achieve ‘Zero Leprosy In India’ in near future.

The talk was well received amongst the participants, who included Govt. of India and WHO representatives as well as ILEP. Prof. Kar was also the chairperson for the Rabindranath Dutta Memorial Oration given by Prof. P. C. Singh, an eminent Dermatologist of Odisha, former Professor and HOD of Dermatology, KIMS. The conference was of national importance and was prominently featured by national newspapers.

Around 8% of lepromatous leprosy cases have been detected in most of the tertiary care hospitals of India since the last 10 years. Recently, in the last few months, there is registration of more number of untreated lepromatous leprosy (LL) patients in tertiary care centers, including in Dermatology OPD at KIMS. In the last three months (January – March), after 1st wave of Covid-19 settled down, a series of untreated LL cases attended the dermatology OPD contributing 67% (6 out of 9) of all the leprosy cases. This has been observed in many other tertiary care set-ups in India. Both WHO and National Leprosy Eradication Program (NLEP), Manager of Central Leprosy Division, Govt of India took it seriously for setting up a National Workshop for detailed discussion on research, both hospital based and field based.