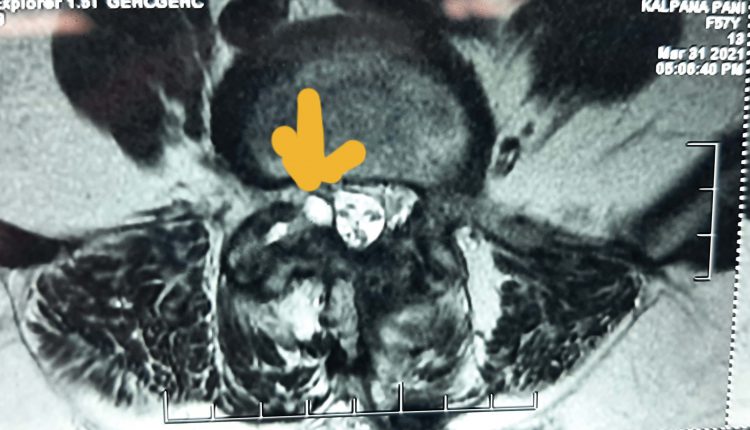 Synovial cysts are thought to be relatively uncommon causes of lower back pain with symptoms including radiculopathy, neurogenic claudication, neurologic deficit, and less commonly, cauda equina syndrome. The pathognomonic imaging finding for a facet joint cyst is direct communication of the cyst with the facet joint. Lumbar facet joint synovial cysts are most commonly seen in the setting of facet joint osteoarthritis and, to a lesser extent, spondylolisthesis. We present a case of a patient with severe radicular symptoms with a lumbar facet joint cyst diagnosed by magnetic resonance imaging (MRI) and treated by fluoroscopy-guided injection, aspiration, and rupture.

The patient is a 57-year-old woman who presented to our Pain Clinic with increasing right-sided radicular back pain symptoms for one month. She experienced tingling, burning pain over the right side thigh, calf and dorsum of the foot. The pain was aggravated by sitting and standing. She did not report any difficulty with bowel, and bladder function. On physical examination, a straight leg-raising test of the right leg was positive at 60 degrees. The deep tendon reflexes were 2+ on both knees and ankles.

She had undergone a successful left side L4/5 discectomy four months ago for left side radiculopathy from herniated disc. The current symptoms were new. She had consulted the same spine surgeon who had operated earlier and a MRI of the lumbar spine revealed right-sided L4/5 facet joint arthrosis with a cyst arising from the inferior part of the joint and compressing the right L5 traversing nerve root leading to lateral recess stenosis (Fig. 1). Despite oral medications (anti-inflammatory, gabapentin and tramadol), the patient experienced no relief of her symptoms. She was subsequently advised to have surgical resection of the cyst but the patient was reluctant to undergo one more spine surgery. After she visited our clinic, it was decided that conservative management be employed, and percutaneous cyst aspiration, injection, and possible rupture attempted.

After thorough written informed consent, the patient was positioned prone on the procedure table. The skin entry point was anesthetized with 1% lidocaine. A 22-gauge 3.5-inch spinal needle was advanced under fluoroscopic guidance into the right L4/5 facet joint (Fig. 2a, 2b). By injecting a small volume of contrast (0.2ml) into the right L4/5 facet joint, the intra articular placement of the needle was confirmed and in that process the cyst also got distended (Fig. 2c). Around 1 ml of serosanguinous fluid was aspirated, and then 20 mg methylprednisolone acetate and 1 ml 0.5% bupivacaine was injected into the cyst (Fig. 2d, 2e). In an attempt to rupture the cyst, 3-4 ml of normal saline was injected into the facet joint and cyst. The patient felt an immediate relief of symptoms after the aspiration, and had complete resolution of symptoms when last followed at six weeks.

Accurate diagnosis of facet joint synovial cyst results in a number of therapeutic implications. Facet joint injection with steroid and local anesthetic can provide temporary or prolonged pain relief which may be of value in patients unfit for surgery. CT or fluoroscopic guidance has been described in the literature with good success and even complete resolution of the symptoms. In patients where percutaneous technique fails, surgery has been found to be effective in a high proportion of patients. Minimally invasive techniques for the treatment of lumbar synovial cyst seem to eliminate many of the risks of traditional surgical techniques. In this case, direct needle aspiration of the cyst was performed, and this less invasive procedure may be employed as an alternative to surgery. Since the cyst may spontaneously decompress, conservative treatment can be beneficial. However, surgery may be required if this treatment fails.

Facet joint synovial cysts are treated with an interlaminar or intra-articular approach under image guidance. Direct cyst puncture may cause dural puncture if performed using a translaminar approach. Most of the reports prefer an intra-articular approach in performing cyst aspiration. However, in using the intra-articular approach, aspiration of cyst fluid may be difficult because of the relative ball-valve effect, which occurs as negative pressure is applied. Bureau et al described a technique to rupture the cyst by injecting the joint or inferior joint recess with as much as 3 ml of betamethasone and bupivacaine, followed by 1-5 ml injection of normal saline. Rupture of the cyst was accomplished in 50% of cases, with pain relief in 9 out of 12 patients. We followed the same technique to rupture the cyst. However, another technique involves inserting another spinal needle through a paramedian translaminar approach to rupture the cyst. This technique has the potential to cause dural puncture and associated complications. Similarly, CT guided cyst aspiration has been successfully reported in the literature but cost and higher radiation exposure can be a prohibition in some places.

In our patient, direct puncture of the cyst and aspiration was accomplished using a facet intra-articular approach with fluoroscopic guidance. The patient experienced complete resolution of her right limb radicular pain and remained pain-free at the 9 weeks follow-up. This successful technique helped us avoid surgery. However, long-term results of this percutaneous technique are awaited. The patient had no Dural puncture, or any additional complications.