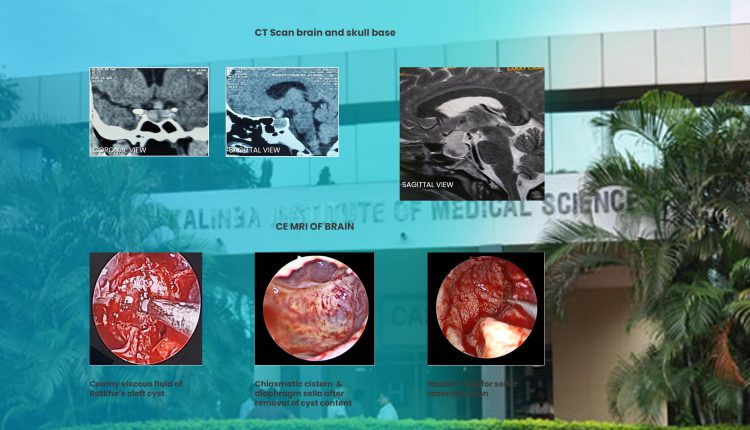 Pituitary (sellar/suprasellar) lesions are usually slow growing and hence mostly asymptomatic. Symptomatic lesions are mainly due to hormonal alteration (overproduction/under-production) and compression effect on optic chiasma (visual field defects). Growth hormone, followed by prolactin are the two most common hormonal abnormalities observed in patients with pituitary lesions. The diagnosis and management of pituitary diseases require an interdisciplinary approach, with the participation of  a Radiologist, Ophthalmologist, Endocrinologist, ENT surgeon and Neurosurgeon.

Rathke’s Cleft Cyst (RCC) are benign cystic lesions of pituitary arising from epithelial remnants of Rathke’s cleft, with a peak incidence at 30-50 years of age. Its incidence is three times more common in females than males. It contains mucous or gelatinous material, encapsulated inside a cyst wall of cuboidal or columnar epithelium.

The most common clinical manifestations of RCC are headache followed by visual field defects and pituitary hormone abnormalities. Headache is usually non pulsating, episodic and located in the frontal or retro orbital region. It is caused by elevated pressure in the peri-sellar region. Visual field defect is due to compression of optic chiasma, leading to bitemporal  hemianopia. Endocrine dysfunction includes hyper-prolactinaemia, insufficiency of gonads, the adrenals and less frequently of the thyroid. In rare cases of lesions penetrating the suprasellar space, diabetes insipidus  may also be observed. The most common endocrinological manifestations include secondary amenorrhea, reduced libido and impotence.

Diagnosis is strongly suggested by MRI, showing the presence of a midline non-enhancing lesion, located exactly between the anterior and posterior lobe of pituitary gland.

A 53 year old male was referred to KIMS with gradual bilateral diminution of vision, generalized weakness and headache since 2 years. There was no history of any vomiting, imbalance or loss of consciousness.

CT Scan Brain and skull base showing a bulge in sellar region.

Surgery was done by the Department of Neurosurgery and ENT, in collaboration with each other.

The endoscope was introduced in the right nasal cavity. Partial middle turbinectomy was done. Sphenoid ostium was identified & widened bilaterally. Posterior septectomy was done. Rostrum and anterior wall of the sphenoid sinus were removed. At the midline of sphenoid sinus, structures identified from above downwards were sphenoid planum, the sella and the clivus. In the lateral wall of sphenoid sinus ,carotid artery and optic nerve protuberances along with optico-carotid recess (OCR) were visualized .

Sellar bone was removed by microdrill and 2 mm Kerrison punch was used to expose the dura. When the dura was opened, a creamy viscous fluid along with caseous material was found and was removed by suctioning. Then, the cyst wall was removed by gentle curettage. After complete removal of the cyst, chiasmatic cistern, optic chiasma, pituitary stalk and pituitary gland were clearly visualized.

There was no intraoperative CSF leak. So abdominal fat and fibrin glue were not used. Hadad’s flap (nasoseptal flap) was used to prevent CSF leak and to close the sellar defect. Tissue from cyst was sent for histopathological study.

Rathke’s cyst is the most common incidentally discovered sellar lesion followed by pituitary adenoma. Small cysts are usually asymptomatic. So yearly follow up with imaging is a reasonable option. Large cysts  cause a pressure effect, which needs surgical intervention.

Due to high recurrence rate ,close follow up with 12 monthly MRI scans for at least 5 years is essential after surgery. Factors associated with an increased risk of recurrence include presence of squamous metaplasia in the cyst wall, enhancement of lesion in MRI, cyst size, residual cyst demonstrated on post operative MRI, use of abdominal fat and/or fascia graft, intra operative CSF leak, and presence of infection.

The panoramic endoscopic visualization allows to assess the completeness of lesion removal. Endoscope allows to perform surgical maneuver within the sella in a safer and fully visualized fashion than with the tunnel vision afforded by the operating microscope. Thus endoscopic endonasal approach to skull base pituitary lesion is a safe technique with less morbidities which requires multidisciplinary involvement.