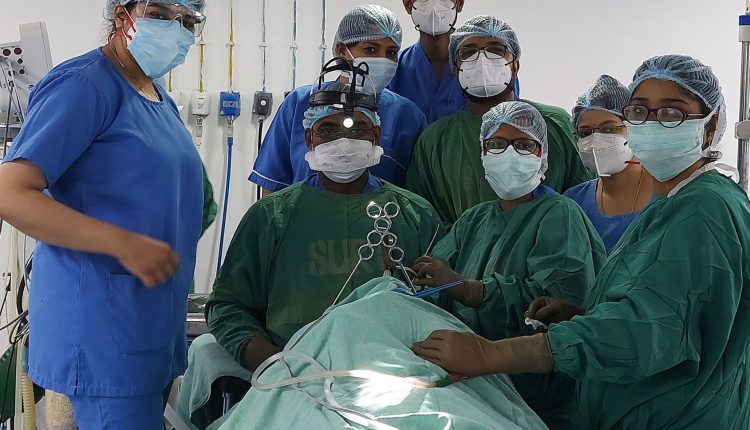 Elongated styloid process syndrome, first described by American otolaryngologist Watt Weems Eagle in 1937, is a rare facial pain syndrome affecting 0.4% of the population. It is characterized by elongation of the Styloid process of the temporal bone (above 2.5-3 cm in length) and, in some cases, calcification of stylohyoid ligament.

Two main types of Eagle’s syndrome were identified, namely the classic Eagle’s syndrome and stylocarotid syndrome. The classic type involves cranial nerves being impinged within the parapharyngeal space between the excessively long styloid process and a connective tissue scar formed following the resection of palatine tonsil. It is characterized by throat pain, frequently radiating towards the ear and exacerbating upon mastication, swallowing, and head movements, globus sensation, odynophagia, dysphagia, and, in some cases, lockjaw and restricted lateral mandible movements. The stylocarotid syndrome develops when the elongated styloid process mechanically irritates the sympathetic nerve fibers which coil the carotid arteries causing pain within the infraorbital, temporal, parietal, and auricular regions. The impingement of internal carotid arteries leads to unilateral headache. Syncopes may also be observed.

A 52-year old female presented to the Department of Otorhinolaryngology of KIMS with a 1-year history of left-sided otalgia, left side facial pain. Pharyngeal symptoms are also commonly reported in cases of Eagle syndrome. These complaints range from dysphagia/odynophagia, foreign body sensation, pain with yawning, or pain with turning of the head. The patient had tried several courses of anti-inflammatory medication and antibiotics without sufficient relief.

A complete head and neck examination including fiberoptic laryngoscopy was performed, and finding pain in the left neck with deep palpation over deep to angle of mandible. Intraoral palpation of the left retromolar trigone and left peritonsillar region also elicited pain.

A cone beam CT scan of the neck was obtained. Based on the radiographic analysis, the diagnosis of Eagle Syndrome was confirmed. As the patient had failed medical management, surgical intervention was offered and the patient was keen on pursuing this option.

The endoscopic assisted intraoral approach began with a bilateral tonsillectomy, after which the tonsillar fossa was palpated to identify the tip of the styloid process. Dissection was then conducted down through the medial pterygoid and superior constrictor muscles. Then blunt dissection was used to identify the styloid tip. The dissection is further taken to the periosteum of the styloid process and the ligamentous attachments to the process are removed (calcified stylohyoid ligament). Finally a rongeur tool was used to fracture and remove the styloid tip as proximally as possible. The tonsillar fossa then sutured and closed.

This procedure was made possible by the best efforts of Doctors of KIMS from the Department of ENT. The leading surgeon was Professor Dr. Khageswar Rout assisted by  Dr. Debasis Jena, Dr. Swatee Dash, Dr. Imran W. Khan and Dr. Shubham Agrawal.