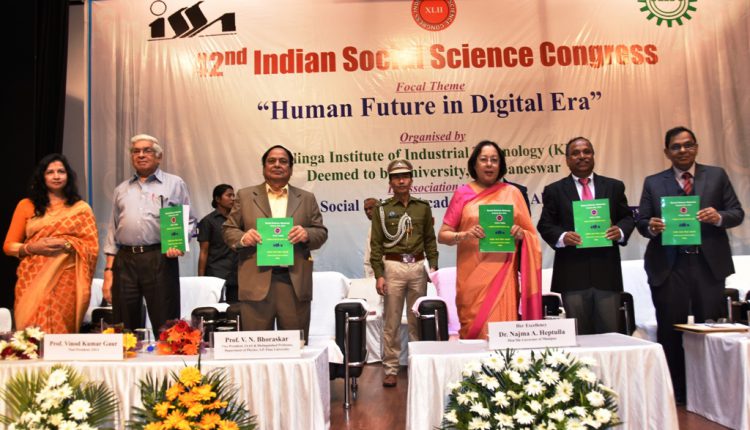 Organized by KIIT Deemed to be University in association with Indian Social Science Academy(ISSA), the 42nd Indian Social Science Congress was inaugurated byHon’ble Governor of Manipur, Dr. Najma A. Heptulla today at Convention Centre, Campus-6.The Congress will be held from 27th to 31st December, 2018.The focal theme of this year’s conference is “Human Future in Digital Era.”

In her address, Dr. Najma A. Heptulla, said that Indian Social Science Congress strives to bring all the branches of science in general under the umbrella with a view to build science of nature, man and society in Indian condition and the world at large. All the branches of science, whether social, political, philosophical or  linguistic are coming together with different technologies.

Since there is no Scientific Literature in Indian Languages ever, even after 70 years of Indian independence, which has laid to a decline in the quality of Science Education & Research in our country.

“May ISSA through ISSC strive to produce Scientific Literature in the form of monographs, books and proceedings in all the Indian languages which would be a commendable contribution,”

She elaborated that building bridges between Universities, Colleges, Institutions and people in the society is another wider object of ISSC. In Science and Technology, India is becoming one of the world’s powerhouses. The country is steadily improving in Research & Development. Our endeavor should be spreading the beam of knowledge and development to every nook and corner of the country  touching the lives of every citizen  through Science and Technology.

“The research should not be made as one time exercise, rather it should be sustained. Moreover, the scientific temperament should be sustained also in Social Science sector and there should be continuity in its quest to better the mission of the people. In this context, I would like to suggest for setting up of Research Centers of national level in every state which will go on focusing the practical applicability of Social Science,”

Placing the Welcome Address, Prof. Sasmita Samanta, Registrar, KIIT DU said humanity and compassion are the essence of life. Opportunities are there for all of us to come together and respect each other in order to bring Social Science under one umbrella, i.e. Indian Social Science Congress.