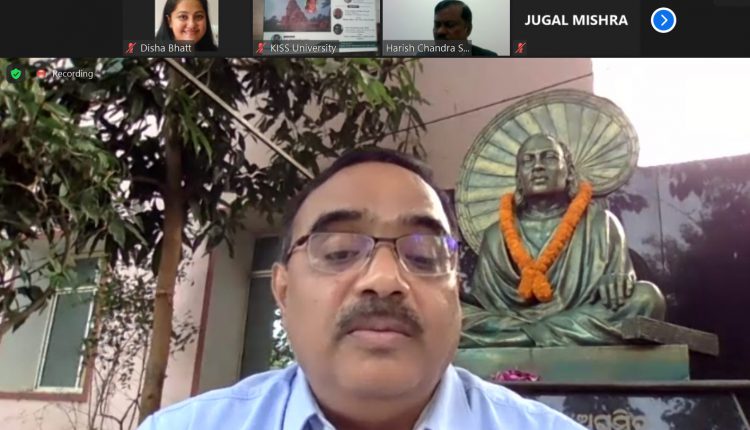 The Gopabandhu Research Chair at KISS Deemed to be University organized a webinar on ‘The Freedom Struggle of India and the role of Gopabandhu Das’ on 2nd February 2021.

Utkala Samilani was formed in 1903 under the leadership of Utkal Gourav Madhusudan Das, demanding for a separate Odisha province. The freedom struggle gained momentum when Mahatma Gandhi came to India in the year 1915. Gopabandu Das initiated the merger of demand for a separate Odisha province with the national freedom struggle along with Mahatma Gandhi. He had contributed for the development of Odia literature and his journey as a freedom fighter was  reflected in his poetry.

Professor Pritish Acharya, Regional Institute of Education (NCERT), Bhubaneswar, outlined the countless contributions of Pandit Gopabandhu Das in the field of social work, education, journalism, legal practice, participation in Utkal Sammilani, Indian National Congress, Swadeshi Movement, and Non-Cooperation movement, among others. He explained that “Pandit Gopabandhu Das was a versatile genius and was aptly called the ‘Jewel of Utkal’ by Prafulla Chandra Rai. He founded Satyabadi School in Puri District, which then functioned as Nation Building School, and spent nearly 25 years of his life working for the upliftment of the downtrodden ”.

Professor Manoranjan Pradhan, Viswa Bharti Shantiniketan, highlighted Pandit Gopadandhu Das’ literary prowess, especially during India’s freedom struggle. Some notable works he mentioned include, Dharmapada, Bandira Atmakatha, Karakabita, Nachiketa Upakshyana, Gomahatmya, etc. Dr. Pradhan mentioned that Dharmapada was particularly influenced by Das to dedicate his life towards the service of mankind. Addressing Das’ role in the freedom struggle, Dr. Pradhan extolled the poet’s participation in the Swadeshi and Non-Cooperation movement of the Indian National Congress in Odisha. “Truly speaking, Gopabandhu Das was determined to eliminate British rule from Odisha and India, and he devoted his life to the freedom of our motherland”, explained Dr. Pradhan.

Professor Basanta Kumar Panda, Director of the Centre of Excellence for Studies in Classical Odia, also spoke on the life and contributions of Das towards the freedom struggle, with particular focus on his attempts at merging Odisha with Indian Union. He narrated Gopabandhu’s experiences during his two-year period of exile at Hazaribagh Jail, and commented that Das was deeply influenced by the political philosophies of Mazzini and Garibaldi of Italy.

Speaking earlier, Dr Prashanta Kumar Routray, Registrar, KISS DU emphasized on the objectives of establishing Gopabandhu Research Chair at KISS-DU. “The aims and purpose of KISS is in sync with the ideals of Gopabandhu Das and Founder of KISS, Dr. Achyuta Samanta has established four research chairs in the name of great sons of Odisha at KISS (Utkalmani Gopabandhu Das, Utkal Gourav Madhusudan Das, Santha Kabi Bhima Bhoi and Sri Biju Patnaik) with the vision and intention of promoting research and development excellence.

The objectives of these chairs are to undertake extensive study of available materials and research for analyzing the socio-economic relevance of their ideology and works in the present context and drawing inspiration for future course of development of Odisha”, Dr. Routray added. Professor Bijayananda Singh, Chair Professor, Gopabandhu Research Chair presented a brief justification behind zeroing down to the topic of the webinar. “The Gopabandhu Research Chair strives to create an intellectual platform to seek knowledge on the life and works of Gopabandhu Das”, he said.

Professor H. K. Satapathy, Advisor, KISS-DU, summarised the erudite discussion by stressing on the key aspects of Gopabandhu Das’ contributions to the field of education. Following this, Professor Jugal Kishore Mishra, Chair Professor, Madhusudan Das, Research Chair, KISS-DU, delivered the vote of thanks, expressing gratitude to the distinguished speakers, dignitaries, participants and the organizing team for their valuable time and inputs.