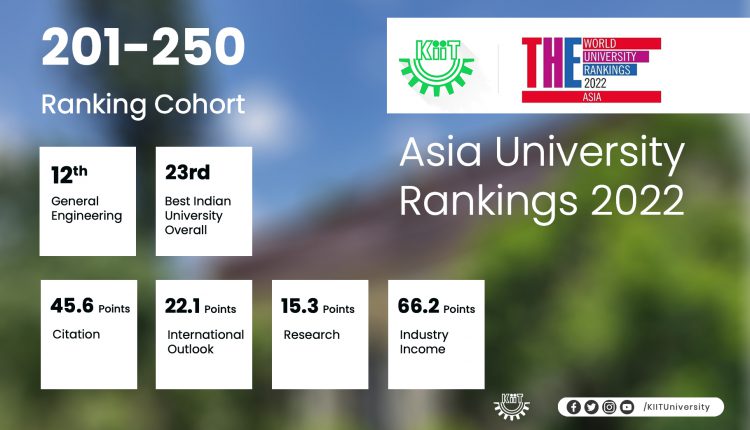 Steps fall short often when someone calculates the strides made by the Kalinga Institute of Industrial Technology (KIIT) Deemed to be University, Bhubaneswar, and the rankings it has bagged in a plethora of disciplines down those years.

One more laurel comes its way as it has been ranked as the 23rd best Indian university in the overall category by the Times Higher Education in its Asia University Rankings for 2022, a giant leap forward of seven places over last year.

In The Legion of Tops

In the General Engineering (Overall category), the University jumped three places to the 12th position, which is higher than some of the IITs and prestigious private universities in the country. With an overall score of 32+, KIIT has been ranked in the cohort of 201-250 in the Asian continent, and among a handful of Indian universities that have made it to the ranking list.

This is a significant achievement for the University, which was established as an institute about 25 years back, and is considered a relatively young university in comparison to the established ones.

According to the 2022 ranking list, the University has emerged as the best in Odisha, edging past other government and private-run universities that have been mentioned in the ranking list. “KIIT has been performing at par with the prestigious institutions in India like the IITs, NITs, and other reputed universities.

KIIT, which has placed a concerted focus on the citation, research, and international outlook, has done exceedingly well in these categories. In the Citation category, the university has scored 45.6 points. Indian Institute of Science Bangalore, which has topped the Indian universities, has scored 31.5 points in this category.

In the Industry Income category, the university has scored 66.2 points, which is one of the best among the Indian universities and one of the prime contributors to pushing up KIITs overall ranking.

KIIT-DU is the only self-financing university from eastern India and Odisha to enter the prestigious THE Asia University Rankings, which list the world’s best universities that are 50 years old or younger. KIIT is only 18 years old as a university and 25 years old as an institute. It has also been achieving and sustaining its impressive positions in various global rankings of higher education institutions.

This is a big success for KIIT as we strive for academic excellence in all spheres, said KIIT and KISS Founder Dr. Achyuta Samanta. An elated Staff, students, management, and well-wishers of both KIIT & KISS have profoundly thanked and expressed gratitude to Dr. Samanta for the latest achievement and for his vision to place the University among the best globally.

South Asia Women’s Conference at KIIT discusses the path to…