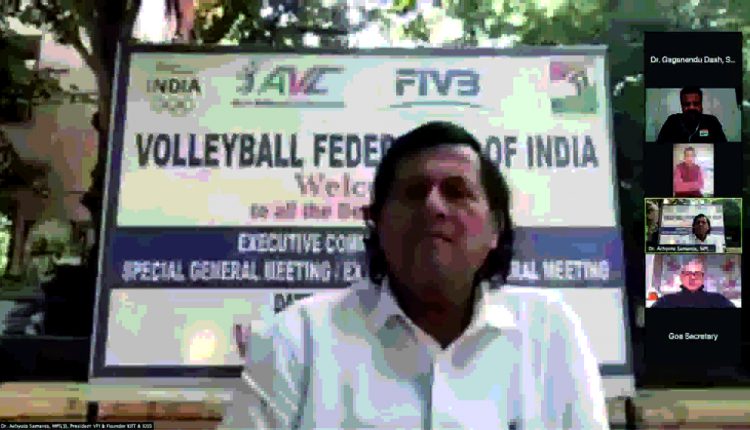 Presiding over the virtual executive committee meeting, Dr. Samanta said, for the first time so many referees from Odisha have qualified in National level which is a good sign for the Volleyball future in Odisha. Dr. Samanta proposed to set up a Volleyball academy for rural junior boys and girls in Kandhamal district and another Volleyball Academy for the boys and girls in KIIT Deemed to be University. He also proposed to organize National Volleyball Championship, National Coaching Camp in Odisha and International & National Referee’s Examination at KIIT Deemed to be University. The executive body members of VFI and the general body members unanimously approved the proposal of Dr. Samanta. He informed the members that he has taken many initiatives for the promotion of volleyball in Odisha. Among these initiatives are distribution of volleyball playing equipment like volleyball, volleyball net etc among various parts of Odisha particularly in Kandhamal. He also informed that initiatives have been taken for the up-gradation of existing volleyball infrastructure at rural level with better amenities in some areas with floodlight facilities in Odisha. On this occasion Dr. Samanta requested all the members of VFI to take up similar initiatives especially in the grass root areas of their respective states to popularize volleyball among the rural youths.