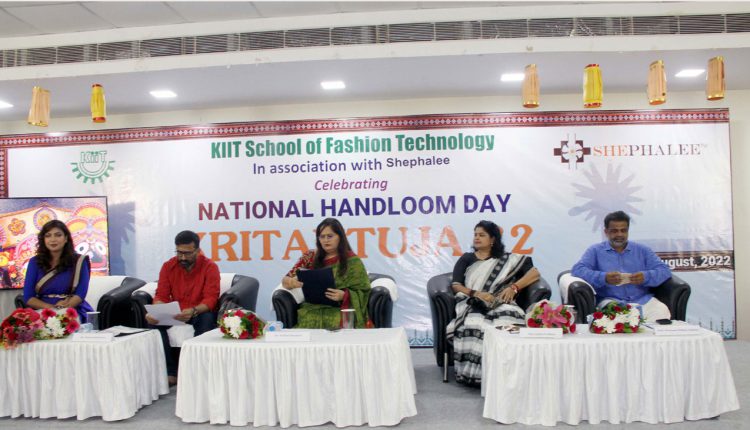 The KIIT School of Fashion Technology celebrated National Handloom Day in collaboration with Shephali Designer House with the inauguration of Kritantuja – 22 on 7th August 2022.

The two-day event was kicked off by Latika Pradhan, MLA, Kabisuryanagar as the chief guest. She exhorted the need to attract and raise awareness among the younger generation towards handloom and traditional art and crafts for the overall development of the sector.

Director of Satyajit Ray Film and Television Institute, Kolkata, Himanshu Khatua; Director of Shephali Designer House and editor of ‘Kadambini’ and ‘Kunikatha’ Dr. Itirani Samanta, actor and producer Samaresh Routray attended the event as special guests and spoke about the importance of the National Handloom Day.

Espousing the need to make women self-reliant, the Kabisuryanagar MLA said they are key stakeholders in the growth of the handloom industry and the sector also plays a key role in women empowerment.

The KIIT School of Fashion Technology was set up by KIIT and KISS Founder Dr Achyuta Samanta to nurture creativity and creative temperament among the students. His vision has helped students to refine their talents and showcase them before the world.

Dr Itirani Samanta said her designer house, named after her mother, is focused on creating products that lend a contemporary style and design. She added that people would be encouraged to use handloom items with minor modifications reflecting present-day flavour.

She said that her endeavour to venture into the creative sphere will be a notable addition to her career that has spanned across art, culture and literature.

Speaking on the occasion, Samaresh encouraged society to develop a taste for traditional arts and crafts. He hoped that the sector will continue to grow at the national and international level because of the involvement of KIIT-like institutes and individuals who are committed to the cause of the handloom industry.

Deputy Director of the School Gipsita Nayak presented the welcome address, while course coordinator Bauri Raul proposed the vote of thanks.