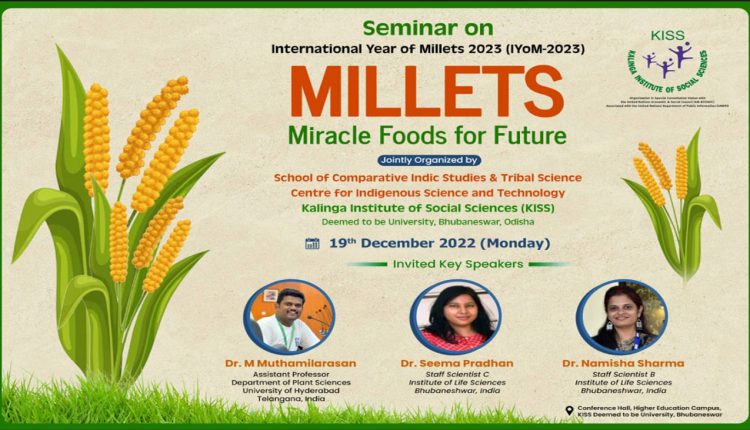 As a curtain raiser to the celebration of International Year of Millet 2023 (IYoM 2023), the School of Comparative Indic Studies and Tribal Science and the Centre for Indigenous Science and Technology, KISS-DU jointly organized one-day national seminar on ‘Millets: Miracle Foods for Future’ in hybrid mode on 19th December, 2022. Dr. M Muthamilarasan, Assistant Professor, Department of Plant Sciences, University of Hyderabad was the Keynote Speaker and Dr. Seema Pradhan, Scientist C, and Dr. Namisha Sharma, Scientist B, Institute of Life Sciences, Bhubaneshwar were invited as the distinguished speakers.

In his welcome address, Professor Deepak Kumar Behera, Vice-Chancellor, KISS-DU, highlighted awareness and importance of the millets. Millets have been the staple food of the tribes of Odisha, and have diversity in distribution throughout the state. Due to lack of awareness of their advantages and evolving dietary practices, they have mostly been absent from staple crops. Many government and non-government organizations have put a lot of effort in recent years to popularise millets as a healthy food option, particularly to provide food security for everyone. He also marked that the resolution designating 2023 as the International Year of Millets invites all stakeholders to support initiatives aimed at increasing public awareness, framing and shaping policies with respect to health and nutritional benefits of millet’s consumption, their suitability for cultivation under challenging and changing climatic conditions, and also shaping policy attention to improve value chain efficiencies. The Sustainable Development Goals (SDGs): primarily SDG 2 (Zero Hunger), SDG 3 (Excellent Health and Well-being), SDG 8 (Decent Work and Economic Growth) SDG 12 (Sustainable Consumption and Production), SDG 13 (Climate Action) and SDG 17 (Global Partnership) are being worked toward by supporting millets in their comeback.

In his Keynote Address, entitled ‘Millets for Future’, Dr. Muthamilarasan shared with the audience that one in 10 of 8 billion humans goes to bed on an empty stomach. Every 10 seconds, a child dies out of hunger. 25% of all children suffer from malnutrition, especially in the first five years of life. He explained that India now leads the world in child stunting and child wasting of growth. Out of the 11 lakh 28 thousand vascular plants, approximately 7000 crops were used by humans throughout history, but today, less than 50% of staple foods consist of 3 main food crops – rice. wheat and maize, and 12 other plant crops that, along with 5 animal species, account for 75% of the world’s food. With a total of 15 crops feeding 8 billion people, and given that climate change often affects these crops, the scenario is grim and not sustainable. It takes 110 days for paddy to mature, 2500-9000 litres of water are required per kilogram of polished rice. The solution may thus be either mainstreaming underutilized crops or using biotechnology to improve traits. Compared to rice, millets require very little water, are disease-, salinity- and drought-resistant. Indian Institute of Millet Research has recently come up, but minor millets have been largely ignored. Before the Green Revolution, millets were major crops; however, the area under cultivation has sharply come down, while profits do not go to the farmer. The origin of shifting to a completely rice-based diet and the origin of higher incidence of metabolic diseases in India is coincidental. Millets, unlike rice, have a low glycemic index, while being high in energy, fibre, minerals including calcium, and vitamins. Gut microbiota slowly digest the complex starches found in millets to ensure a sustained release of glucose instead of a sugar rush.

Dr. Muthamilasaran described one of his research findings carried out during the pandemic, countries affected by lack of rice exports suffered from acute hunger. He also presented a roadmap for the cultivation of millets in hunger hotspots, and then appropriate upscaling, downstream processing, genetic improvement and enhanced supply. He showed how the rising tide of suicides among farmers could be stemmed by adding millets as an alternate crop. Climate change would ultimately result in a loss of yield as well as diversity of crops, and thus it is imperative that we shift gradually to millets as the food of the future.

Speaking on little millets as a climate resilient crop for the future, Dr. Seema Pradhan emphasized the diversity and importance of millets. She revealed that specific genes were upregulated and downregulated in millets when exposed to drought and salinity stress. Speaking in turn, Dr. Namisha Sharma described how biotechnology could be used to improve food crop strains, using genes from millets to induce resistance to drought, heat, and salinity. The deliberation was followed by a question answer session. Among others, Professor Emeriti, KISS-DU – Dr. Siba Prasad Adhikary, Dr. Atanu Kumar Pati, Dr. N. Nagaraju, Dr. B. B. Mishra, Dr. Nirmal Chandra Dash shared their erudite thoughts on the topic.